The Shadows of Avalon, by Paul Cornell (BBC novel) 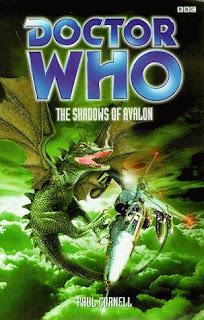 "Behind them came the Lady President, the War Queen, Mistress of the Nine Gallifreys. She was dressed, utterly typically, in scarlet chinoise pyjamas with a high square collar. The usual lengths of pearls were the only accessory, save for the bangles at her left wrist. She wore, Cavis noted, oriental clogs, and her toenails were painted in the swirling colours of the vortex. She'd had a tiny Prydonian Seal tattoed on her left ankle, or perhaps it had appeared there when she'd regenerated."


Paul Cornell received almost universal praise for his first two NA novels, Timewyrm: Revelation and Love and War. Opinions were a bit more divided by No Future, which was very much the climax of the controversial character arc with Ace. Cornell continued to receive praise for Human Nature, both as a novel and for its adaptation as a Tenth Doctor television story. The Shadows of Avalon, in the BBC range of novels follows No Future, not only in dividing fan opinion, but in its bleak and gritty portrayal of a well-loved character. Personally, I loved this novel. I adore Cornell's writing and I admire his contribution to the radical Virgin New Adventure novels. The Shadows of Avalon very much had the feel of a New Adventure, rather than a BBC book.

The bulk of this book is set in a magical otherworld in which there are dragons and 'fairies.' This world is very vividly portrayed. It turns out that this is not the world of Morgaine; apparently there are many worlds that resemble Celtic mythology. Although Battlefield is referred to (thankfully no reference to Morgaine's fate is made, thus protecting the continuity of my post-Battlefield fanfic), it does seem as though Cornell is trying to write a better version of Battlefield. The Shadows of Avalon has the Brigadier, Celts, an alternate universe and nuclear missiles.

Although this novel occupies a pivotal role in the War in Heaven story arc, it is all about the Brigadier. The Brigadier is a relatively young man again, due to the events of Happy Endings (Cornell does not give a stuff about Lawrence Miles' hints that the NAs take place in a different universe). He is consumed by grief over the death of Doris. He is remarkably similar to the embittered, brutal and bullying Brigadier that we see in Jim Morimore's Blood Heat. This angsty portrayal is the kind of thing that turns off fans who don't like the New Adventures. Despite all the angst, it is clear that he still has a deeply warm friendship with the Doctor. Through much of the novel, the Brigadier plays a very Star Trek game of "Kiss me, stupid!" with the Celtic warrior queen, Mab. Mab interestingly identifies his title with the goddess Brigida and sees her attributes in him.

The Shadows of Avalon features the destruction of the TARDIS. Unfortunately, we have all seen Frontios, so we can't quite believe it has really been destroyed. This means that although the regulars don't leave in THE TARDIS at the end, throughout the novel we are expecting the TARDIS too turn up again undamaged. I suppose the destruction of the TARDIS is such a mythos-shaking event that it is impossible to get right.

Although The Shadows of Avalon is a strong enough novel in itself, it also plays a pivotal role in the War of Heaven arc. The War elements introduced by Lawrence Miles take place in the background, unlike The Taking of Planet 5. We discover here that Compassion is in fact a TARDIS! The newly regenerated Lady President Romana has sent her two agents to capture the first sentient TARDIS to mate her with other TARDISEs produce the new breed of War TARDISes. Nevertheless, the Doctor and Fritz escape on board Compassion and spend the next few stories on the run. The transformation of Compassion is well handled by Cornell and the description of her interior is well described.

I love the new Romana! There are few things I love more than camp, super-bitch villainesses. I found myself imagining her looking like Vivien Fay in The Stones of Blood (as I said, I love my camp villainesses). Unfortunately, we only get Romana III at the beginning and the end, but thankfully she is back in The Ancestor Cell (the only enjoyable feature of that novel).

A lot of fans hated the two Celestial Intervention Agents, Cavis and Gandar. I found them hilarious! They are badass, Blaxploitation Time Lords, who hero worship the Doctor and the Master. That is the great thing about Time Lords; you can do almost anything with them. You can turn Romana from a female Doctor to a bitchy, glamourpuss ice queen and you can create CIA agents who belong in a Quentin Tarantino movie. I suppose many fans found them just too pantomime. I actually quite like silly pantomime villains, provided that they really are evil and the story is serious enough. As I said with regards to Invaders from Mars, putting comical villains in a light-hearted story is a bad idea; you need a serious villain to present some menace. On the other hand, in a more serious story, having comical villains can work quite well. Paul Cornell evidently takes the view that Time Lords only get a second heart after regeneration, as he describes the never regenerated Cavis as 'Cavis the One-hearted.' I see a bit of a problem here in that we are told that the Doctor knew Cavis when he was still on Gallifrey. This means that she is older than the First Doctor, while appearing young. Why has she not aged as the First Doctor did?

The Doctor is extremely well portrayed. He comes across as having real depth. Cornell makes the 8th Doctor such a charming character. Fitz, that other likable character of the BBC range is also handled well. Cornell has such a genius for bringing characters to life and taking them through situations that shake them to the core.

The fairies in the book turn out to be Eocenes, as seen in Dr. Who and the Silurians. This is an idea that certainly feels right. The problem is that so little attention is given to it. One might imagine that with all the Brigadier and the Doctor's shared history with the Eocenes, the fact might be worthy of a bit more comment.

For a Cornell novel, there are surprisingly few references to rock music or popular culture. I suppose there is less room for them in a novel about a pre-modern culture in an alternate world.

The Shadows of Avalon is remarkably different from the previous books in the War in Heaven arc, nevertheless it is a really solid contribution to one of the most exciting developments ever seen in Doctor Who (a development which was sadly all retro-erased by unimaginative BBC editors).
Posted by Matthew Celestine at 05:32