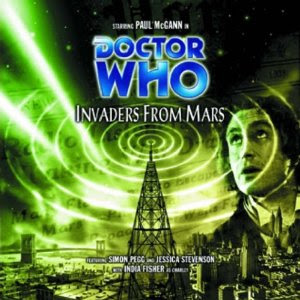 Having heard some good reports about this audio drama, I did wonder if it would change my opinion of Mark Gatiss. It did not. I still consider Mark Gatiss to be one of the worst Doctor Who writers out there.

The premise of a story set around the broadcast of Orson Welles' War of the Worlds radio adaptation is a good idea. The idea was not used terribly well. Orson Welles himself plays little role in his plot and the real alien invaders who turn up never actually hear the real broadcast of War of the Worlds, instead they get the Doctor's version. Invaders from Mars is not a terribly imaginative or original story; it has an alien invasion, plus different factions trying to get their hands on alien technology.

Mark Gatiss made the same mistake in Invaders from Mars that he made in Victory of the Daleks; that of throwing in everything except the bathroom sink. Gatiss has thrown in far too many characters and subplots. The Soviet spy was completely unnecessary to the development of the plot.

Invaders from Mars is very much a comedy story. Comedy in Doctor Who can have mixed results. Sometimes it works, as it does in Delta and the Bannermen, sometimes it falls flat, as with The Creature from the Pit. The comedy in Invaders from Mars left me rather cold. American mobsters are too much of an excuse for dull cliches. Invaders from Mars would have worked better had Gatiss made the aliens a little less silly. You can have laughs in Doctor Who, but the nature of the program is such that you have to have a real threat. Delta and the Bannermen worked incredibly well because it had Gavrok, an humourless black-clad villain played without any irony or parody. The silly aliens of Invaders from Mars fail to generate that kind of menace.

There are plenty of fans who will offer a contrary opinion, but in my judgment, Invaders from Mars is one of the poorer Big Finish audios. So far I have yet to encounter anything of real quality from Mark Gatiss.
Posted by Matthew Celestine at 02:25