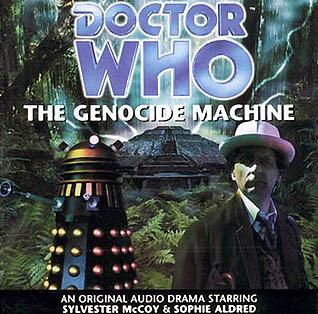 The Genocide Machine is essentially a back to basics Dalek story. The Doctor turns up on an alien world, finds out that Daleks are up to no good and sorts them out. It is inevitable that Big Finish would sooner or later have attempted such a story. The Genocide Machine does what it sets out to do and I think proves to be a fairly enjoyable experience, even though personally I prefer stories that attempt to do a bit more than this.

The Genocide Machine was the first Dalek story for a long time to do without Davros. The unfairly maligned War of the Daleks had him in, but it thankfully portrayed him as an icompetent moron who his Dalek creations could run circles around.

The Daleks in this audio are quite brilliant. They are really sinister and ruthless. The Daleks seem to work remarkably well on audio. Best of all, we get to hear the menacing tones of the super-cool Emperor Dalek. As a Dalek story, The Genocide Machine is an audio that will touch all the right buttons with fans.

I'm not sure why Big Finish opted to use McCoy and Aldred for this audio. It does not feel very much like a Seventh Doctor story. The difficulty with these 7/Ace audios is doing anything very interesting with them. The New Adventures cornered the market when it came to developing Ace and the Seventh Doctor, leaving Big Finish without anywhere much to go. McCoy is strong on this audio, but Aldred, who was never the most talented actress, is rather lacklustre, especially playing a duplicate. One oddity is that Ace succeeds in making the Daleks think she is the duplicate. The First Doctor failed to do that in The Chase.

The supporting characters in this audio are good enough, though the running joke about the character who does not speak falls a bit flat. They really needed to give that character something interesting to say at the climax; dialogue that never comes.

The alien inhabitants of Karr-Charrat are quite distinctive and are definitely a race that is better suited to audio than to the television medium. Their voices are very effectively realised.

If you are looking for a good old-fashioned Dalek story without too many Terry Nationisms, look no further than The Genocide Machine. I would still recommend giving John Peel's War of the Daleks a chance though. It's really not that bad.
Posted by Matthew Celestine at 04:36