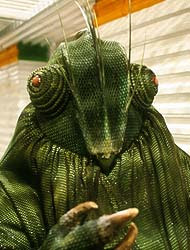 In my judgment this is the strongest season of Doctor Who ever. It has so many classic stories and even the weakest story, Meglos is not nearly as bad as some of the disasters of other seasons. It seems as though everything came right in Season 18.

I think it is fair to say that before Season 18, Doctor Who was a mess. Production values had declined atrociously during the Williams years. The program looked cheap. The guest cast no longer acted naturally and sent up the scripts they were given. Tom Baker had stopped being a proper lead actor and had turned into a stand-up comedian in the middle of a drama. The Doctor had become invulnerable; one no longer felt that the plots mattered or could be taken seriously. Another year of daft comedy and sloppy serials would have killed the show for good. The new producer John Nathan-Turner came on board the show with a mission to clean up Doctor Who and get it together again, a mission he took totally seriously. Over the years, John Nathan-Turner made many errors of judgment for which he has received no end of criticism from fans. Nevertheless, I firmly believe that in Season 18 he revitalised the show and made it strong again.

John Nathan-Turner insisted on quality and in this season he got it. We see improved performances, beautiful synthesizer scores, brilliant location shooting, lavish studio sets and some wonderful costume designs. The stories of Season 18 really do look and feel great. The comedy elements were substantially toned down. Tom Baker still gives us some great comic moments, but they are all the better for being more sparingly used. Tom Baker gives us some of his best performances in this season, coming across as a much more sombre, almost melancholic figure. Lalla Ward was unhappy with the changes to the show, but she maintained her strong rapport with Tom and continued to be a pleasure to watch until her departure in Warriors' Gate.

The improved quality of the show has sometimes lead to the accusation that it was 'more style than substance.' This ignores the real depth of this season. These are genuinely intelligent stories. They deal in both hard science and mysticism. We get scientific theory about entropy, but also Hellenistic philosophy. For all the stuff about Tachyonics in Leisure Hive, we get Medieval ideas about sacral monarchy and spiritual cosmology in The Keeper of Traken. Best of all, the stories of this season are wonderfully diverse, reflecting a willingness to move beyond tried and tested formulas.

While its sad to see Romana go, the departure of K9 was a wise decision. Season 18 brings in a host of new characters- Adric, Nyssa, Tegan, the new Master. Not all of these characters had been very well thought-out and the results are a mixed blessing. For all the hatred that Adric has received, he is a character with interesting depths and in this season with Tom Baker, he works well. The Keeper of Traken is most definitely Adric finest moment.

A great story that demonstrates the value of a more serious approach to the show. Tom Baker gives a brilliant performance in his new serious mode. After Season 17, it is a remarkable shock to have the Fourth Doctor looking vulnerable and weak.

The weakest story of the season. It is something of a retro-style space adventure. It is not very impressive, but there are far worse stories in other season. Its nice to see Jacqueline Hill for the last time, even if she is a little wasted in a cliched role.

Not the most exciting Doctor Who story ever, but it is a story that really benefits from the improved visual quality of the season. The Marshmen are men in rubber suits, but they look great.

A classic that has never been fully appreciated. State of Decay is far superior to Hincliffe attempts to evoke Hammer-style horror. Definitely Uncle Terrance's finest moment, it offers a real contribution to the Doctor Who mythos with its whispers of the Dark Times.

One of the most experimental Dr. Who stories ever. Warriors' Gate needs to be puzzled over, but it can be enjoyed on a purely visual level. Avoiding the need for lengthy exposition, Warriors' Gate tells what may be centuries of history with just the shot of a woman being punched.

A rich story that makes effective use of an impressive studio set. The fairy tale feel of this story is quite welcome. Nobody gives a bad performance in this serial.

Lawrence Miles' favorite Doctor Who story. Logopolis has a delightfully sombre aesthetic. The end of the Fourth Doctor's tenure is treated as a sort of narrative funeral. While visually impressive, the plot is not so strong and Anthony Ainley gives a performance that leaves a lot to be desired.
Posted by Matthew Celestine at 02:20