Klein and a Girl in Uniform, by Matthew Clarke (my fan fiction) 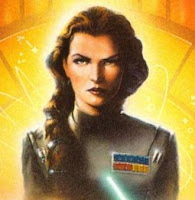 A femslash crossover with Star Wars.

Imperial Admiral Natasi Daala may be the one of the least popular characters in the Star Wars Expanded Universe, but I have loved since I was 13. Now Klein does too! I think Daala is the kind of humourless, incompetent villain who would fit in so well in a Graham Williams era Doctor Who story. I think Star Wars fans who hate the work of Kevin J Anderson are akin to Doctor Who fans who hate Graham Williams stories.

This is entirely for fun and is out of character with my Elizabeth Klein series.

The Doctor had visited the Far-Away Galaxy on a few occasions. He always found it a little unsettling, as though he did not really belong in that part of the universe. Even the Time Lords knew little about the all-encompassing Force that held that galaxy together.

Taking a companion from the Far-Away Galaxy was something new entirely.

What was it that Ian had said to Barbara about taking in stray cats? Klein had begged him to let Daala come on board the TARDIS. "Her empire is defeated and she has nowhere else to go," Klein had pleaded with a big-eyed look. He had not expected such compassion. Maybe he should remember her pleas if he came across any Jewish refugees back on Earth.

Why did it have to be a former Imperial admiral with an attitude to match her fiery red hair? Couldn't Klein have made friends with that nice princess or those two funny robots he had met in the Far-Away Galaxy? One fascist woman on board the TARDIS had been bad enough; but two? Before long they would be having him goosestep around the ship and shine his shoes every morning.

The Doctor turned and looked at his two companions. Klein and Daala were huddled together on the wicker couch, arms entwined. Despite abandoning the Imperial remnant, Daala was still in her olive grey admiral's uniform. She had removed her boots and had her feet curled up on the couch. Klein, in her tweed skirt had kicked off her slippers and put her feet up. Daala had her hand on her stockinged leg. She kissed the blond woman, letting her copper hair fall over Klein's shoulders.

The Doctor had not seen such Sapphic passion in his companions since he had been travelling with Peri and Erimem. He had not expected Klein to be interested in ladies. He was even more surprised that she would fall for her an alien from another galaxy, though in fairness to her, the humanoids of the Far-Away Galaxy were identical to Earth Humans.

He supposed that Klein saw something of herself in Daala. Both women had struggled to find their place in a sexist society and yet given that regime their utmost loyalty. Both women had seen the empires they served crumble, leaving them with nowhere else to go. Like Klein, Daala had also seen the loss of a lover, some colonial governor called Tarkin who had been killed in guerrilla assault.

It seemed that Klein had found a place in her heart for a girl in uniform.
Posted by Matthew Celestine at 06:01