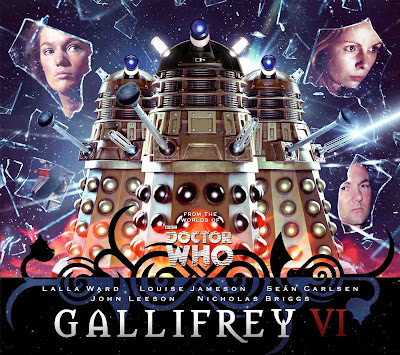 The cover of this audio shows the bronze 'Time War' Daleks from the BBC Wales Series. This was one of the first in a series steps toward the inclusion of the New Series in Big Finish Doctor Who. With the new UNIT series coming out and the River Song audios, this process seems almost complete. I'm not sure I'm altogether comfortable with Big Finish doing the New Series, as I regard it as a last haven of New Series-free Doctor Who.

This follows on from previous seasons of Gallifrey, but can be just about enjoyed without prior knowledge, just as long as you know who Leela and Romana are and what a Dalek sounds like. At the end of the day, the Gallifrey series is about the cast, not about the story. It's about the joy of hearing Lousise Jameson and Lalla Ward together. The story is ultimately rather confusing, driven by technobabble and not especially memorable. The ending in particularly satisfying. I'm not altogether sure I like the idea that one can reset Gallifrey like a computer game and download the minds of her inhabitants.

We get an absurd piece of continuity fetishism thrown into this towards the end that is really typical of Gary Russell. In a bid to save Romana from the Daleks, Coordinator Narvin orders the Celestial Internvention Agency to prevent the creation of the Daleks or alter their nature, thus firing the first shot of the Time War (at least according to RT Davies). He then finds out that Romana is safe and realises he just risked the entire fabric of time needlessly. This feels slightly silly and seems to have been thrown in the end, almost as an after-thought.

Having the Daleks in this series was a real treat. The Daleks work just as well on audio as they do on television, if not better. You have to love the way they sound so excitable in their shrill voices, like hyperactive children. Their presence means that Leela gets to do what she likes best, lots of fighting. The warrior of the Sevateem seems pretty impressed when her Lady President decides to grab a weapon and join in.

As could only be expected, Lalla Ward does not fail to delight as Romana. She shows a steelly maternal care towards Gallifrey, while at the same time betraying a strong sense of weariness. I love the part where she is about to be sent into exile in a Type 40 TARDIS, speculating that after 'stopping a few alien invasions' she will spend more and more time in the library and eventually go mad.

This audio also introduces a future incarnation of Romana, called 'Trey' for convenience. She is played by Juliet Landau, better known as Drusila in Buff the Vampire Slayer. This Romana appeared more recently in the audio Gallifrey: Intervention Earth. In my review of that story, I discussed whether she is the same as the Romana III in the BBC novels, so I won't go into that here. The new Romana is very striking and enjoyable. She hugs her old self and comes across as very extrovert and girlish, yet is also far more ruthless and manipulative than her earlier incarnaton. The two Romanas attempt to get each other exiled, and the new Romana succeed.

This audio has its faults, like most of Big Finish's output, but it is well worth a listen.