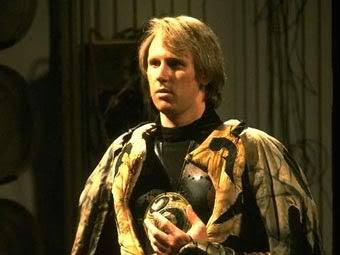 One of the things that is most often pointed out about this season is the sign of the show increasingly relying on its past continuity. The first serial of this season brings back the long forgotten Omega. The next story was a sequel to a serial in the previous season. The big story arc of the season involves the Black Guardian from Season 16 and we get an inevitable Master story at the end. When the stories are decent, its a good thing, but when they are less impressive, the reliance on the past becomes something of an irritation.

One positive aspect of this season is the complete lack of such unoriginal stock elements as bases-under-siege, returning monsters and mad scientists. I really admire the freedom with which writers in this season felt free to dispense with those, even while making heavy reliance on past continuity.

Peter Davison is rather inconsistent in this season. He is absolutely brilliant in Snakedance, but in some of the other stories shows the same blandness that characterised him in the previous season. It's nice to see Tegan back in the first story, though it is odd that we saw her leave at the end of Season 19. It is a relief, as Nyssa on her own would have been mind-numbingly boring. A change in costumes for the two companions is very welcome. Nyssa finally gets out of that awful, unflattering velvet suit; though her new outfit is not that good either. Tegan also wears something other than that purple uniform during this season.

This season is definitely not a high point in the history of the show, but it's definitely one that is worth looking into.

If you thought ending a season with Time-Flight was a bad idea, JNT opened the new season with Arc of Infinity. It could have been a good story, if only the cast had acted like the events really mattered.

A sequel that both surpasses and complements Kinda.

A refreshingly gentle story. The final episode rather lets it down.

Full of character and drama, as well as lavish visuals. Very nicely done.

A half-hearted and half-thought out attempt at a historical.
Posted by Matthew Celestine at 04:53