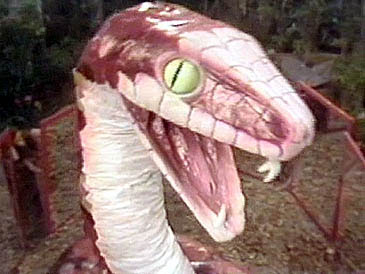 Season 19 saw the introduction of new lead Peter Davison. He presented a new image of the Doctor, a Doctor who was more human, more vulnerable and more of a team player and less of the rugged individualist that the Fourth Doctor had been. I really like the Fifth Doctor. He was so pleasant and charming. It must be said that in his first season, Davison came across as rather bland and lacking in charisma. This is not entirely Davison's fault, or even the fault of the writers. John Nathan-Turner did not allow Davison or the writers much freedom to develop the character.
Davison's portrayal would improve in the next season and would reach enormous heights in Season 21.

Season 19 saw a considerably enlarged crew, with Tegan, Adric and Nyssa all on board the TARDIS. They had something of a tendency to fall out, which gave this season a slightly soap opera feel. There were two problems with this. Firstly, these characters had not been thought out well enough to come across as believable characters in a soap-style drama. Secondly, it was a children's' show so any mention of sex was out of the question. A soap opera which avoids relationships of any sexual nature is never going to work.

Adric has come to be the big hate figure of this season. He worked well with the Fourth Doctor, but thrown in with a younger Doctor and two young women and he becomes an irritation. Adric has come to be best known for his tragic death at the end of the season. Adric's tendency to go to the side of the enemy has often been pointed out. This may in part be because Adric felt more comfortable in the company of older men. as could be seen when he was with the Fourth Doctor. It has been suggested that he might have been gay, but it is not unusual for young men to enjoy the companionship of older men.

Nyssa does not come across as terribly interesting. Her nasal voice is not easy on the ear either. With an overcrowded TARDIS, the writers tended to keep Nyssa out of the action, as can be seen in Kinda and Earthshock. Tegan is definitely the strongest character in Season 19. While other fans find her too miserable, I really like Tegan. She comes across more as a real person than Sarah Jane Smith who seemed genetically engineered to be a companion. Unfortunately, with Adric and Nyssa around, we never really got much chance for Tegan to develop a strong enough relationship with the Doctor to be really interesting.

The strongest element of Season 19 is undoubtedly the sheer variety of stories. The writers offered a number of different genres- wild experimentation in Kinda, all-action sci-fi in Earthshock and period drama in Black Orchid. Not all of these stories worked out so well, but it this is a marked improvement on some previous seasons that relied on one kind of story.

It's good to have a more vulnerable Doctor, but for my money, Davison spends too long being weak and helpless to make an impressive start. This story has wonderful production values, but has a weak plot and spends just a bit too long in the TARDIS.

The ending is a little weak, but this is a visually impressive and genuinely enjoyable story.

A classic effort at taking a more experimental approach to the show. Kinda is a thoughtful and rich story with some brilliant performances.

I hate this story. It's basically a poor man's Time Warrior with lots of pointless running around and getting captured.

It's nice to see the production team coming up with a classy and polished period drama, without any science fiction embellishments. Unfortunately, it suffers from a lack of depth to the story.

The Cybermen get updated for the 80s. It's not the cleverest of stories, but it's full of action and has aged well. And those female soldiers are so cute!

What was JNT thinking ending the season on this sorry excuse for a story?
Posted by Matthew Celestine at 09:56