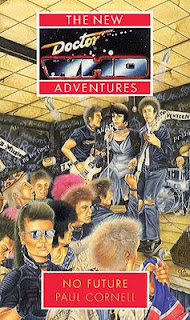 "It's my opinion that the Doctor symbolizes the best values of British life. Eccentricity, the creative amateur, and civilization."

No Future brings to a conclusion the story arc concerning a series of temporal alterations that began with Blood Heat. It also concludes the story arc concerning Ace's bitterness toward the Doctor. Naturally, this calls for Cornell's trademark emotional drama. This is a tale of bitterness, betrayal, but ultimately reconciliation. From this book onwards, Ace comes to terms with the Doctor (though I think she never really forgives him, as can be seen in Head Games). Forget about that hypocritical drunk, Bernice. The New Adventures should not be celebrated for introducing Benny, but for what they did with Ace. Instead of just taking a character from the television series and writing stories with her in, they took her and developed her in exciting and disturbing ways. We actually got to see a companion who was angry with the Doctor and who resented him for the things he did. This boldness with the character of Ace is what makes the Big Finish Seven/ Ace stories so dull. The Big Finish stories just want to recreate Season 26 (except with Hex thrown in some of them). The Big Finish writers just want that 'nice girl Dorothy' (as Mel described her in Head Games).

No Future reintroduces the Meddling Monk as a villain. This was a risky strategy. The danger with the Master is you make him too suave and charming. The danger with the Monk is that he ends up being there as a cute comic character. Cornell portrays the Monk masterfully, giving him a real depth. He at first appears in the guise of a record company boss who is very clearly modelled on Richard Branson. When his identity is revealed to the reader, we encounter him as a very kindly clerical figure. In this guise he shows his talents at manipulation. There is a beautiful moment where Ace breaks down before the Monk and confesses to him every sin she has ever committed and even makes some up. Despite his apparent kindness, however, this Monk is a much more evil and twisted character than the one we saw in the Hartnell years. Of course, he still gives us some camp fun; there is a wonderful moment when he sings "Don't know much about history!"

The Monk is portrayed as a second-rate, would-be Doctor. He is not only full of bitterness about past defeats, but is also full of envy towards his more accomplished counterpart. What I loved most about this portrayal was the fact that he not only plans to give the Doctor a prolonged agonising death, but he also seeks the ultimate revenge- to steal the Doctor's companion. In an almost soap opera style, the Monk attempts to seduce Ace away from the Doctor and make her his own companion. The Master never tried that. In the end Ace reveals herself to be manipulating the Monk and betrays him, yet it is obvious that she was genuinely tempted to betray the Doctor.

Not only do we get the return of the Monk, but we also get the most unlikely returning race- the Vardans! Cornell does a great job of giving the Vardans some background, history and character. We are also treated to a female Chronovore. The climax of the book echoes The Time Monster, with the Chronovore capturing the Monk to be tormented for eternity. Evidently he escaped, as he has recently reappeared in the Big Finish audios.

Cornell always does interesting things with the Brigadier. We get to see how much he admires the Doctor as an embodiment of English virtue. Perhaps in tribute to Barry Letts, Cornell reveals that the Brigadier is a Buddhist. The Brigadier believes that the Doctor is a Bodhivista, one who has gained enlightenment, but who remains in this world to help others. This is a fascinating spin on the Doctor Who mythos.

No Future is a fitting climax of the dark, angst-filled initial phase of the Virgin New Adventures. I think it is a brilliant and adorable novel and one of Cornell's best works.
Posted by Matthew Celestine at 10:15