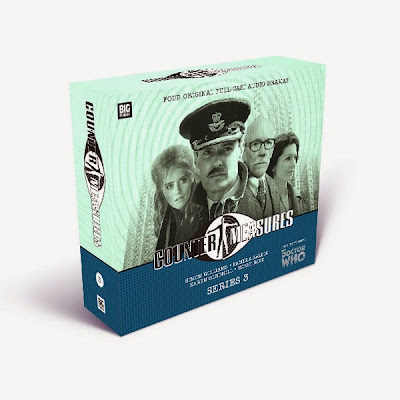 I was quite slow buying this box set. I suppose my enthusiasm for Counter-Measures was dampened a little by the last series. I really love the characters, especially as Remembrance of the Daleks is my favorite Doctor Who story, but I find it hard to get enthusiastic about the sort of stories they have run since Series 2. I suppose I just don't care for the science fiction lite medium. I really want aliens and monsters and they just give me gangsters with alien technology, top secret weapons and Communist plots. The stories are a little like 'monster of the week' X-Files stories, but with a more rationalist worldview. X-Files kept us watching the more mundane stories because we knew behind it all was an amazing story arc about aliens. Counter-Measures has story arcs, but nothing of the grandeur of the X-Files mythos. This is particularly seen in the final story, Unto the Breach. The initial premise, an alien in the custody of the Communist powers is really exciting and then it turns out to be just a trick. I felt a bit cheated.

It is difficult to see Counter-Measures as a Quatermass homage, as it was in its first series. The Concrete Cage certainly owes a lot to Nigel Kneale, but otherwise there is not much Quatermass going on. Quatermass was always about the cosmic 'other,' about the inhuman intelligences beyond the borders of our world, about slimy tentacled beings. Without aliens, you can't really have anything close to Quatermass.

I wish Counter-Measures would do some stories about space travel and exploration, after all Rachel Jensen references British Rocket Groups in her very first appearance. If you take the common view of UNIT dating (which I disagree with), Britain is going to send spaceships to Mars in about ten years from when Counter-Measures is set. Space travel ought to be a hot issues in this time period.

Templeton, who had taken over from Sir Toby at the end of the previous series is kicked out at the end of the first story. Although he makes a return in the final story, I was still disappointed. What was great in the previous series was his interaction with Sir Toby. They were great together; too similar characters who are still quite different. Unfortunately, they do not interact at all in this series.

Gilmore seems to have gained a few more men, which is a good thing. In the previous two seasons, he was rather reduced to being a chauffeur for Rachel. On the other hand, as a senior military officer, he ought to have a few more staff officers around him (not that UNIT never had that problem in Doctor Who).

It was nice to see Alison's backstory being developed in The Forgotten Village. It was also great the way they dealt with the subject of dementia. However, Alison does come across as a bit whiny in much of this series. In fact, Ian and Rachel come across the same way. The problem is that the first story establishes that the team really want Sir Toby back. Then, after they get him back, they go on about how dreadful and untrustworthy he is. It really makes them look rather fickle. I don't see how Counter-Measures can go on with continual suspicion of Sir Toby's motives. Sooner or later (and it is surprising they have not already done so), the team are going to have to get used to Sir Toby.

The theme music has changed for Series 3. The new theme seems to reflect the generally dark tone. The original theme seemed to suggest that Counter-Measures was a light-hearted pastiche of Sixties spy drama. I almost wish it was. I do find myself wishing we could have a bit more humour. It would also be nice to have a few more references to the wider Doctor Who world. Obviously, you can't have Zygons or Daemons appearing in every story, but it is Doctor Who fans buying these audios and sometimes they deserve rewarding with a bit of continuity fodder.

I like this series for the great characters, and generally the writers serve them well, but Counter-Measures is not quite the spin-off I would like it to have been.


Posted by Matthew Celestine at 06:15