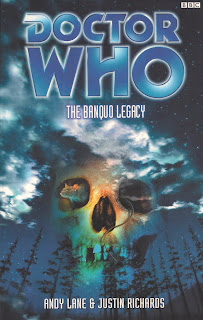 Fleeing the Time Lords on board Compassion, the human TARDIS, the Doctor and Fitz come to a Victorian house in which a number of grisly events occur.

The influence of Wilkie Collins 'Woman in White' is very pronounced in this novel, though the horror element takes that influence in rather a different direction. The style of narration has an experimental feel, with different characters narrating slightly out of sequence. These narrators are quite well characterised which aids the impact of the novel. The Banquo Legacy generally makes for an exciting read.

The elements of the story that relate to the War of Heaven story arc are very much sidelined, though the Time Lord agent is well portrayed. Compassion's interfacing with Susan is an interesting idea, but it does leave Compassion being written out of the action, as she was in too many novels. Fitz is pretty amusing in this story and the Doctor comes across as very Doctorish.

All praises aside, there is something of a lack of interesting ideas in this novel. With some of the massive developments seen since in the BBC range since Lawrence Miles penned Alien Bodies, The Banquo Legacy does come across as just a plain old horror story, as well written as it is. I also feel that we have perhaps seen a few too many Victorian era stories in Doctor Who. This novel does seem to want to flirt with the Steampunk genre, that I rather detest for its self-conscious coolness.
Posted by Matthew Celestine at 08:31