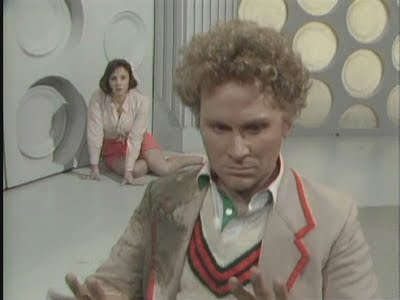 Stotz: You better turn this ship around Doctor!
The Doctor: Why?
Stotz: Because I'll kill you if you don't!
The Doctor: Not a very convincing argument actually, Stotz, because I'm going to die soon anyway, unless of course —
Stotz: I'll give you to the count of three!
The Doctor: Unless of course I can find the antidote… I owe it to my young friend to try because I got her into this —
Stotz: One,
The Doctor: So you see —
Stotz: Two,
The Doctor: I'm not going to let you stop me now!
Stotz: Three!

Is Caves of Androzani the greatest ever Doctor Who story? Perhaps in evaluating that claim one should consider the rivals. Genesis of the Daleks is sometimes suggested as the best Doctor Who story. Genesis is certainly a popular story with some well remembered moments and great performances. Nevertheless, that serial had significant flaws in it's plot and is regarded by a minority of fans (including myself) as rather overrated. Another contender is City of Death. I suspect those who advocate City of Death as the greatest Doctor Who story feel that Caves of Androzani is a bit bleak and lacks the light-hearted feel that has so often been a part of the show. City of Death is certainly a serial that is hard to fault, but I don't think it quite smacks one in the face with its brilliance in the way that Caves of Androzani does.

In Caves of Androzani, we see the meeting of two assets; the inspired script writing of Robert Holmes and the strong artistic flair of director Graeme Harper. It is really unfortunate that Harper only went on to direct one more story in the classic series, Revelation of the Daleks. Not only does Harper bring to life a very realistic glimpse of a future society, but he brings a strong aesthetic sense to the production with the evocative score, the classy sets, the Kabuki-look of Sharaz Jek and his very aesthetic, almost statuesque death in the arms of his faithful android Salateen.

Robert Holmes was by no means a writer who could do no wrong. Even some of his more highly regarded scripts such as Spearhead from Space and Talons of Weng-Chiang show signs of padding. In Caves of Androzani, however, Holmes crafted one of the tightest plots in the history of Doctor Who. Caves of Androzani has something of the same feel as a tragedy like Romeo and Juliet, where a series of closely connected events seem to conspire against the characters.

One complaint about Caves of Androzani is that the Doctor is not very proactive. He does everything he can to save Peri, yet he shows no concern for dealing with the bad guys and improving the situation on Androzani Major. This contrasts quite radically with the Seventh Doctor, who always had an agenda, secret or revealed. Nevertheless, surprisingly this does not diminish the awesomeness of this Doctor. In fact it seems to increase the potency of his figure. In Caves of Androzani, the Doctor manages to be an 'Oncoming Storm' without even intending it. By simply arriving on a planet he sets off a chain reaction which causes a series of planet-shaking events.

Season 21 had been all about how the noble figure of the Doctor was confronted by the stark brutality of the cosmos. Here the Doctor meets an assortment of vicious and self-serving characters. The most sympathetic character in the story, Chellak is prepared to send his own men on a suicide mission just to protect his career. Faced with such human monsters, the Doctor is able to display the height of his nobility, as well as his sense of weltschmerz or world weariness. Perhaps the most powerful scene is when Stotz threatens to kill him and the Doctor simply ignores his threats. It is as though the Doctor has spent the last year having people point guns at him and he just does not care at all. Nothing matters any more except saving Peri.

Fans generally agree that it was a colossal error of judgment for John Nathan-Turner to follow this serial with the appalling Twin Dilemma. After the glory of this story, it was such a massive come-down to watch a half-thought out B-movie with a new Doctor who was at first viewing somewhat repulsive. The tragedy of this was that Colin Baker had been set up to fail as a Doctor. Yet in another sense, The Twin Dilemma was the perfect sequel to Caves of Androzani. There is a real sense of tragic pathos in the way the brutality and malice that had characterised Season 21 overcame the gentle Fifth Doctor, forcing him to take on a new persona. It is as though the kindness, gentleness and peaceful nature of the Fifth Doctor was overthrown.

Caves of Androzani is filled with interesting characters. For me the one that stands out is Stotz. He is such a nasty piece of work! The nasty trick he plays on his unruly subordinate is wonderfully done. I love the way his relationship with Morgus is played out. We might expect Stotz to be filled with contempt and bitterness toward the pompous and devious Morgus, yet it seems to be that he genuinely likes and admires Morgus. Despite his dismissal of Morgus' claim to superiority, he sees something of himself in the industrialist, hence his comment "Your just like me, a man with a gun." I love the camaraderie that we see between the two villains at the climax.

One of the mistakes that was made in writing for the Fifth Doctor was the failure to give him enough comic lines. Having witnessed the excesses of the Graham Williams years, JNT had a suspicion of humour in Doctor Who. This was unfortunate, because Davison was great at delivering comic moments. They added to his eccentric charm, yet he did not allow them to define his Doctor as Tom Baker had. Robert Holmes had not written for the Fifth Doctor previously and so gave him a lot of lines that were more characteristic of the Fourth Doctor. These worked incredibly well with Davison and gave his character some added charisma.

Nicola Bryant has not been remembered kindly for her role as Peri. I think she is pretty good in this story. Peri's character worked much better with the Fifth Doctor than with the Sixth. His easygoing charm rubbed the edge off her moodiness. Some fans have pointed out the sense of pathos in the fact that the Fifth Doctor sacrifices his life to save somebody that he only met in the previous story. Some lament the many novels and audios that feature the Fifth Doctor/Peri team in a supposed gap between Planet of Fire and Caves of Androzani. While I sympathize with this view, I do enjoy the 5/Peri material, especially with Erimem. Peri and the Fifth Doctor are such a wonderful team that it would be a waste not to have produced that spin-off material.

It's impossible to think of a more gripping Doctor Who story than Caves of Androzani.
Posted by Matthew Celestine at 04:13