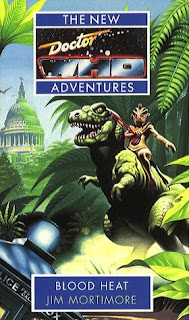 The late Dr. Who and the Silurians

I first read this New Adventure novel when I was twelve years old. I found it hard going, but I did enjoy it. I think I did find the dark tone and harsh portrayal of the characters surprising. Significantly, however, I read this novel and without having experienced Ace and the Seventh Doctor on television (I got into Doctor Who after it had been cancelled). This is probably why I love Ace being a violent, angsty bitch. This is how I experienced her character. A lot of fans who watched Seasons 25 and 26 in the 80s hate NA Ace, but I feel a strong sense of ownership over violent, angsty Ace. That was just how I experienced the character.

Probably what I appreciated about Blood Heat when reading it as a twelve-year old was the simplicity of the premise- What if the Doctor had died in the Wenley Moor caves and the Silurians had taken over? I can't imagine my younger self appreciating a novel with a more complex theme, like Christmas on a Rational Planet. Although this novel has the dark and grim heart of the more 'Rad' NAs, it has an accessibility in its premise that can draw in anyone who loves Doctor Who (even if they do end up hating what it does with the characters). Perhaps it also helps that Blood Heat looks for inspiration less to the televised story Dr. Who and the Silurians, but more to Malcolm Hulke's novelisation, The Cave Monsters. Like the novelisation, it even has pictures.

Blood Heat is really grim. It is full of death and violence. It features the aftermath of a nightmarish apocalyptic scenario portrayed more realistically than Day if the Triffids. Nevertheless, it is how he handles the characters that makes it all the more grimmer. Poor Jo Grant is rendered insane and dies a slow, lingering death after having a miscarriage. The Brigadier becomes a warmongering bully. Benton becomes a brutal thug. Only Liz Shaw remains a sympathetic character (perhaps more so than in Season 7). These are characters that have had to deal with horrible and terrifying situations and it has taken its toll on them. This is ultra-realist Dr. Who. The Silurians come across as pretty nasty too, though Morka (the nasty one in The Cave Monsters) has matured and become more sympathetic. We get a glimpse of hipe when we are told that in Bernice's time, humans and Silurians are at peace.

As with the other books in this period of the New Adventures, Ace is at her most psychotic and violent. I found it really interesting how Mortimore handles her. She is shown to be a monster, but we get to understand why. Remarkably, she actually feels that she likes this nightmare world more than the real earth, especially when she finds that her old friend Manisha ironically survived in this timeline.

My complaints about this book are few and they mostly relate to continuity. I disagree with the author's view that Dr. Who and the Silurians is set in 1973. I am unhappy with the notion that the 'Silurians' are from the age of the Dinosaurs (the Doctor called them Eocenes and they knew about apes).

There is a real depth to this book. The theme of children and future generations is used and explored really effectively. Blood Heat is one of the true classics of the New Adventures.
Posted by Matthew Celestine at 11:12