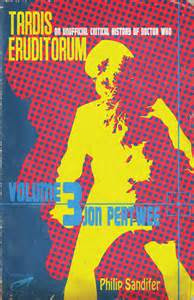 Once again we review the most recent volume of Phil Sandifer's fascinating psychochronography of Doctor Who. As ever we ask, why buy it when you can read the blog for free? Firstly, the quality of the writing is so much better in the book than on the blog. Secondly, we get bonus essays on Torchwood, the mechanics of the TARDIS and a guest essay from Anna Wiggins.

From the outset, Sandifer admits that the Pertwee era is his least favorite period of Doctor Who. This is something I have in common with him, though my reasons for liking the Pertwee stuff are less political than his. This critical stance toward these episodes enables him to write on them with a very evident creative and reflective tension. His concluding essay on Jon Pertwee's tenure is delightfully nuanced, yet for all that he is able to celebrate those things about the character, the actor and the era that are enjoyable.

The book begins with a very interesting essay on Monty Python's Flying Circus. Phil points out that Monty Python had a sketch entitled Science Fiction Sketch, which comes across very much as an absurd parody of the Third Doctor and UNIT. However, remarkably this was broadcast before Spearhead from Space! Thus, the Pertwee era had been effectively lampooned before it had even begun. This observation sets the theme for much of the book, with Sadifer viewing Pertwee-Who as a sort of unintentional parody of itself.

Phil's leftist politics come out in his strong criticism of the Doctor's involvement with UNIT. He makes two criticisms, firstly that the Doctor so quickly becomes involved with a military organisation. Secondly, that the Doctor remains involved with UNIT after the Brigadier's actions at the end of Dr Who and the Silurians. He feels the Doctor's relationship with UNIT ought to have ended then and any criticism in that story is muted by this failure to disengage. He is also uncomfortable with the patrician demeanor adopted by Pertwee.

The essay on The Ambassadors of Death is primarily about David Whitaker, being his last story. It is an affectionate tribute to one of the most fundamental creators of the show. Phil is much more critical of Inferno, a story that gets a lot of undeserved praise from fans. I very much agree with Phil's preference for the former story.

Sandifer does not view Season 7 as a distinct era of Doctor Who, as some fans do. He does, however, make a distinction between 'Action Pertwee' and 'Glam Rock Pertwee.' The former is basically a straightforward action thriller styled science fiction story. The Mind of Evil is perhaps the best example of this. Phil is very critical of this kind of story and seems to feel it is too great a departure from the ethos of Doctor Who, as well as tending towards a dangerous moral simplicity. 'Glam Rock Pertwee' is a rather more complex beast. It is a kind of colourful composition of action and exotica that is absolutely serious, yet somehow feels like a pastiche. Sandifer views The Claws of Axos as the defining example of this genre, with each character playing a clearly defined role that on the surface appears absurd.

I was glad to see that Phil finds things to like about The Time Monster. It's a terrible story, yet he recognises that it has a fascinating combination of Platonism and Buddhism. His essay on the mechanics of the TARDIS also explores the alchemical properties of the Doctor's ship. I found the essay on David Bowie's music and it's thematic similarities to Pertwee-Who very enlightening, particularly as I have never been a Bowie fan.

Phil's essay on The Three Doctors is a marvel. He refers to Doctor Who characters by names taken from William Blake's mythological works. It's beautifully written, but I'm not sure I understand it. I do wish Phil would write a more straightforward essay about Blakean themes in Doctor Who for the benefit of more matter of fact people like me. Anna Wiggins, adds a little clarity to what Phil is trying to do, but her piece is not aided by her unfamiliarity with Blake. I would love to have a better understanding of what Phil is trying to say in his comparison of Blake and Doctor Who.

Unsurprisingly, Carnival of Monsters gets a lot of praise from Phil. It is definitely his favorite story of the period. It is of course, completely different anything else in its era. I would suggest that it feels more like a Season 24 story. Phil seems impressed with Frontier in Space, despite the problem of the Doctor spending much of the story in various jail cells. He comes up with an interesting redemptive reading of the underwhelming and rather tedious Planet of the Daleks. He points out that Terry Nation does not really capture the Third Doctor's usual persona:

"So Pertwee does not get to run around and be ostentatiously imperious as he prefers. Nor does he get to be ignored and occasionally tortured, as he's best at. Instead he stands around and gives speeches about the meaning of courage. Pertwee certainly isn't bad at this, but it's neither in his wheelhouse nor something he visibly enjoys."

Sandifer suggests that Planet of the Daleks is the kind of old fashioned space adventure that the Doctor has outgrown. Now that he is capable of dealing with more complex stories, he can take a back seat and just make speeches about courage and leave the heroism to others.

I was glad to see that The Green Death came in for some criticism. This story tends to get let off easily by fans, despite its shortcomings. While praising The Time Warrior, Phil savages it for its sexism. He finds little to praise and much to criticize in the (in my opinion barely watchable) Season 11.

I am a bit puzzled by Sandifer's handling of Jo Grant. He attacks the sexism of Terrance Dicks which led to her creation. However, he seems to offer some sort of redemptive reading, describing her as 'alchemical' and claiming that she subverts the narrative structure of the stories. I'm not quite sure what he is talking about. This seems to be an example of our author getting lost in his nether-world of radical literary theory and losing the rest of us. That said, this volume is yet another interesting read from Phil and I must say I can't wait for the Tom Baker volume.

Posted by Matthew Celestine at 06:28