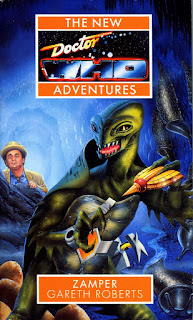 It's commonly stated that Zamper has a poor reputation among fans. Personally, I rather enjoyed it. While I loved Tragedy Day, I was not massively impressed by Highest Science, the Gareth Roberts novel that fans seems to love. I don't think Highest Science is particularly better than this novel.

Zamper sees the return of the Chelonians from The Highest Science. They are as well presented here as they were in that novel and the two main Chelonian characters are nicely characterised. Their anthem is really funny.

On the whole, the cast of characters are interesting, though a few are a bit lacking in depth. Smith was interesting at first, but then turned into a generic pseudo-companion. I was a bit bothered by the fact that the author killed off so many of them and his decision to give the two female villains very gruesome deaths.

The companions are handled really well here. I actually found myself liking Bernice, who I normally despise. On the other hand, the Doctor comes across in this story as incredibly bland and colourless. Roberts was never great with the Seventh Doctor, but he really failed to get him right here.

The Zamps were nicely creepy and there was some thoughtful exploration of the arms trade from the author's typically left-wing perspective. It's not one of the highlights of the New Adventures range, but it's certainly not one of the worst.
Posted by Matthew Celestine at 05:28 No comments:

Why I hate Pyramids of Mars 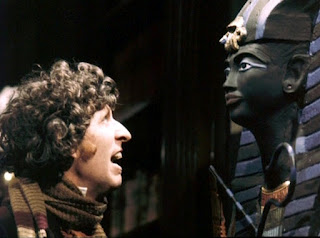 Pyramids of Mars is hailed by many fans as one of the greatest stories of the series. I dissent totally from this conclusion and would argue that it is the most overrated Doctor Who story ever and illustrates some of the failings of the Hinchliffe era. There are of course many far worse Doctor Who stories, but this one is particularly obnoxious by virtue of the praise that is lavished upon it.

When I first watched Pyramids of Mars I was expecting to really love it. Nevertheless, I found myself not enjoying it at all. What really struck me was the bleak, depressing tone of the story. There is a real lack of warmth or humour in it and only the regulars and a few extras avoid being killed off. I didn't find a lot to enjoy in this serial.

Robert Holmes' great strength was in creating interplay between interesting characters. This is completely missing in this story. Dr. Warlock and Lawrence Scarman are not given space to develop as characters and Marcus is just a zombie. Despite being a nasty stereotype, Namin had the potential to be an interesting villain, but he is killed off all too quickly. The subplot with the poacher was pointless. All these characters are introduced simply to be mummy-fodder.

This leads to something that bothers me a lot about the Hinchcliffe producership. Eric Saward's time on the show is rightly criticised for some of its excessive violence. However, sensitivity to Mary Whitehouse's assault on the show seems to blind fans to the excessive fantasy violence of the Hinchcliffe era. These stories seem to revel in death and pain, seeking to appeal to the morbid curiosity of the viewer. We see this in Pyramids of Mars. There may not be any blood or gore to look at, but there are some really horrible death scenes in this. The poacher being crushed by the mummies and Lawrence being killed by his own brother are just nasty. Did you notice how long it takes both Warlock and Namin to die? They howl in agony for ages. This stuff is really not suitable for a children's show. I think there is something utterly tasteless about both this story and the Hinchcliffe era in general.

As with many Hinchcliffe stories, Pyramids of Mars looks to horror movies for inspiration. In this case, it is all those Mummy movies, the Hammer horror version in particular. The trappings of these films in Pyramids of Mars are only superficial, however. A mummy is interesting and disturbing because it is a walking corpse, not because it is wearing bandages. A robotic mummy is just a really banal idea.

We are back in Von Daniken-land with another ancient alien. When you have aliens appearing in every other story, an ancient alien is not terribly interesting in itself. Pyramids of Mars attempts to give this a Lovecraftian twist, making Sutekh a being of god-like power. Furthermore, the story attempts to portray Sutekh as a force of nature, a force antithetical to all life. There are three problems with this.

Firstly, a totally evil god-like being like Sutekh inevitably lacks interesting motives. Simply wanting to destroy everything just for the sake of it is a bit dull. A character like this needs to play off another villain with more recognisable motives. Namin could have fulfilled this role, but he was killed off early on and replaced with Marcus the zombie puppet.

Secondly, the story is too held down by the conventions of science fiction to do a genuinely Lovecraftian turn. The story tries to portray Sutekh as a god-like being, however, he never really behaves like one. Gods don't need to build rockets or use robots. These are the things that science fiction aliens do, and that is basically what Sutekh is.

Thirdly, for all the brilliance of Gabriel Woolf's vocal performance, Sutekh is essentially a man in a mask. We are told that he has the power to destroy the universe, but we are never quite made to believe he can do this. We see Sutekh tormenting the Doctor, but otherwise there is no real demonstration of the Doctor's power. It would have been better to have shown a lot less of Sutekh and to make him more a force of nature than a personality. This is what was done with Fenric in Curse of Fenric. Fenric was very much kept in the background until the end. He was more of a conceptual evil than a villain.

Unlike a good deal of the classic series, Pyramids of Mars attempts to deal with the nature of history and time travel. This is handled in a rather clumsy way, with the Doctor apparently taking Sarah to an alternate 1980 in which the world has been devastated by Sutekh. This makes no sense, as Sutekh is not a time traveller and cannot alter history. Sarah suggests that this is a trick and I think she was right. I think the Doctor was took Sarah to one of Jupiter's moons or some desolate planet. He knew that Sutekh would fail to destroy the earth, but he had no idea what other harm Sutekh might cause, so he tricked Sarah to keep her motivated. That is my theory anyway. In any case, the idea that history can be altered in this story is actually undermined by the fact that history is fulfilled in the end by the fire burning down the priory. This seems to suggest that what will happen will happen.

To be to fair to Doctor Who fandom, many fans are quite conscious that there are problems with this story. It is acknowledged that the scene on Mars is just padding and that there are massive holes in the plot, for instance the question of why Sutekh does not build the rocket in Egypt or the puzzling nature of the alternate 1980. I just don't think there are enough 'good bits' in this story to compensate.
Posted by Matthew Celestine at 03:26 15 comments: