The Silent Stars Go By, by Dan Abnett (BBC novel) 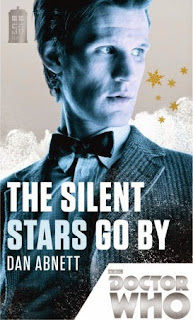 This novel by popular science fiction tie-in writer Dan Abnett, was originally published as a deluxe hardcover volume, then republished as a paperback in a series of Doctor Who reprints.

This was actually the first New Series novel that I have read. I don't care for the New Series, so I was hardly likely to take an interest in its spin-off novels. However, this being the first appearance of the Ice Warriors in a BBC Wales Doctor story and it also being a Dan Abnett novel, I definitely wanted to read it.

Silent Stars is a novel that very much wears its influences on its literary sleeve. With the Christmas feel, it very much feels like a Moffat Christmas episode (though it is better than all of those dreadful affairs). On the other hand, it is not only the presence of the Ice Warriors that makes this feel like a classic four or six part Doctor Who serial; it is also set on a planet that appears to be inhabited by about ten people and has a council consisting of an elder hostile to the Doctor and an elder sympathetic to the Doctor. The simple and effective storytelling puts one in mind of a Terrance Dicks Target novelisation. The playful use of language, such as 'Guide E-manual' and 'Unguidely' also reminds me of Paradise Towers. Rather less fortunately, the novel seems to borrow from the New Series in giving a rather too easy resolution to the story. In the end, the Doctor finds a solution just by tinkering around with machinery, which feels a little uninspiring.

Dan Abnett is experienced in writing franchise fiction, so it should be no surprise that he crafts a very enjoyable and exciting tale here. It is very effective and efficiently told and captures the actors voices very well. Dan Abnett could easily be a Terrance Dicks for the Twenty-first century. What I felt was missing was Dan Abnett himself. When the BBC hires a writer of his reputation, you expect to get something special. I didn't really see that here. Perhaps if he had given us a darker and more militaristic novel, we would have felt more of the writer's individual style.

Posted by Matthew Celestine at 02:18