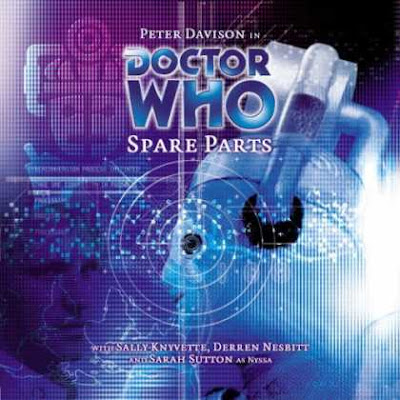 The Fifth Doctor and Nyssa turn up on Mondas to witness the birth of the Cybermen.

Spare Parts has the reputation for being one of the best Big Finish audio dramas. I rather think it is a bit overrated and is not a little disappointing.

It has been said that 'Genesis of the Cybermen' is the great unmade Doctor Who story. Of course, it had been attempted before Spare Parts. David Banks mammoth reference work The Cybermen featured a short story about the birth of the Cybermen. If my memory serves me correctly, it featured an original companion called Felicity. DWM also offered an origin story for the Cybermen in The World Shapers, by Grant Morrison. This featured some great artwork by John Ridgeway, but it was a terrible story. The World Shapers revealed that Mondas was in fact Marinus. There are good reasons for thinking this might well be right, but none of them featured in that story. I got the impression from The World Shapers that neither the artist nor the writer had ever watched Keys of Marinus. The only thing in the strip from the serial was the Voord.

I really can't see the point of origin stories. It's enough for me to know that Batman is Bruce Wayne whose wealthy parents were shot dead before his eyes. I'd rather read comics about Batman fighting criminals than about a young Bruce Wayne learning martial arts. Origin stories are inherently predictable and tend to disappoint. Despite it's incredible popularity, Genesis of the Daleks really is a bit naff. You know the Doctor is not really going to wipe out the Daleks and so we end up with a rather pointless and rambling plot. Introducing a rather generic mad scientist in the form of Davros rather cheapened the Daleks, taking away their impact as an existential threat. So to my mind, I don't really see why we needed a 'Genesis of the Cybermen.'

It's very nice to hear the Tenth Planet-style Cyber-voices again. We also get to hear Tomb of the Cybermen-style voices from the Cyber-planner machine. Spare Parts also captures the horror of cyber-conversion with the sound of drills, lasers and saws going into action. The tragedy of this is shockingly captured when a family encounter their loved one fully cybernised. Nyssa is also able to show more personality and depth than she ever showed in the television series. Unfortunately, these positive points are overshadowed by significant faults in the writing and direction.

The plot of Spare Parts is a mess. Far too much running around and yet another classic case of the Doctor and companion deciding to split up. The Doctor is so indecisive. He can't seem to make up his mind whether to leave or stay and help. He knows that the Cybermen will arise, so just what is he planning on doing? The apparent happy ending that we get inevitably feels false because we knwo that the dominance of the Cybermen can only be delayed.

Given that the strength of Marc Platt's descriptions of ancient Gallifrey in Cat's Cradle: Time's Crucible, it is disappointing that Mondas is a world that makes no real sense. Platt obviously wants us to identify with the people of Mondas, but making the world so similar to England in the mid-twentieth century just ends up coming across as rather false. The family we meet are a caricature. Being honest working people who doff their caps and mind their own business, they have Yorkshire accents. It's hard to take them seriously. Especially given that they think the Cybermen are people in suits, even though there are partially cybernised policemen and cybernised horses patrolling the streets. They are a bit dim. Sisterman Constant also comes across as rather thick too, given her inability to see that she will probably end up getting cybernised herself. Even more of a problem is the anachronism of a world in which people boil water in kettles and travel on trams and yet possesses the technology to cybernise people and to propel the whole planet through space. As the Cybermen have no need to eat, then presumably the organic parts of their bodies are sustained through some process whereby energy is converted into protein. But if the Mondasians posses such a technology, why are they reliant on hydroponics for food? Mondas in Spare Parts is just an unbelievable place.
Posted by Matthew Celestine at 09:07