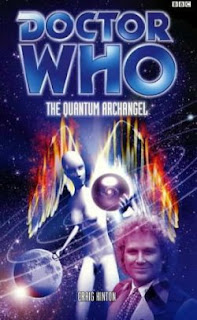 "At the risk of sounding like a high-and-mighty Time Lord, I am a high-and-mighty Time Lord: And to quote one of my elementary texts in the matter: 'And in the aftermath of Event Zero, eleven dimensions did fight for existence. Five were triumphant- together they did become three dimensions of space, and the two dimensions of time through which we travel. But the remaining six dimensions did still exist: although beaten, although denied their dominance, they curled and curdled amongst themselves to become a six-fold universe, separate but conjoined.

'They formed a realm all their own- a universe in which the transcendent beings could thrive and prosper without interference from the lesser beings. A realm protected by the Great and Ancient Covenant.'"

The Quantum Archangel is a sequel to The Time Monster. A lot of fans question the wisdom of following up such a poorly regarded story, nevertheless despite its faults, The Time Monster had some very interesting ideas (as well as some camp fun).

I am the sort of fan who loves lots of continuity references everywhere, so I certainly enjoyed that aspect of the book. I also liked the emphasis on cosmology. Craig Hinton goes to incredible lengths to offer a coherent picture of how the Whoniverse fits together as a cosmos. I loved all the references to various kinds of astral and transcendent entities. On the other hand, not being a physicist, I found the technobabble rather hardgoing.

Quantum Archangel is an interesting book in the concepts it deals with, nevertheless I was not at all impressed by Hinton's writing style or plotting. He certainly did a better (but not brilliant) job with Millennial Rites in the Virgin Missing Adventures range.

I was irritated by Mel's condemnation of the Doctor's failure at the beginning of the book. It is quite clear that the devastation of Maradnias was not the Doctor's fault, but that of its more ruthless inhabitants. Does Mel expect the Doctor to prevent every evil event in the universe? She comes across as horribly sanctimonious. Steve Lyons managed to make Mel's impossibly high standards work in Head Games because he offered a contrast between her and the Seventh Doctor companions.

I am not a big fan of Master stories. He is simply too predictable a character. Hinton handles him reasonably well, though he comes across more like Delgado than Ainley.

Strangely, The Quantum Archangel comes across as remarkably similar to The Taking of Planet 5, a much more radical and innovative book. There are clear similarities between the two novels, both deal with the cosmology of the Whoniverse in hard science style and both are sequels to Seventies stories (Image of the Fendahl, in the case of Taking of Planet 5).
Posted by Matthew Celestine at 07:15