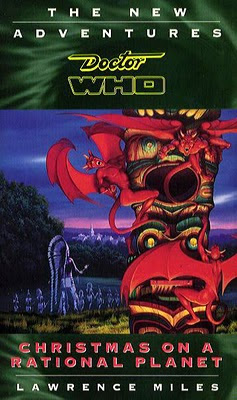 "I've done so much. Saved entire races whose names I can't even remember. And why? Because of reasons. Because of principles. Truth, love, and harmony. Peace and goodwill. The best of intentions. Whatever I've done, I've done for these reasons. And there's been a price to pay. Sacrifices. People close to me have died. Four of my companions, hundreds of the universe's supporting cast. I could fill whole volumes with their names. Bystanders who helped me, perhaps for just a moment or two, and suffered for it. I've died myself, six times over. I have a responsibility. To every one of them, the living as well as the dead. If I let you succeed, if I let you make a world without reasons, then every sacrifice they've ever made in my name would be for nothing. They would have suffered, and died, and triumphed... all for no purpose."

Christmas on a Rational Planet was Lawrence Miles' first novel. Unsurprisingly, it is not as polished as Alien Bodies, the novel that is generally considered his best. Miles has expressed unhappiness as to some aspects of this novel. The plot is very slow and rambling. However, this is not too much of a problem. The slow pace allows much elaboration on it's themes and the creation of a good deal of atmosphere and climate. In this first novel, we see Miles' real talent: he is not so much interested in creating stories as building cosmologies and fleshing out fictional worlds.

I love the way Seventh Doctor era and New Adventures era writers bring up loads of cultural and literary theory (is this related to the fact that the Seventh Doctor dresses like a modern academic?). I am pretty sure that Lawrence Miles has been read an awful lot of postmodern and feminist cultural theory as well as poststructuralist literary theory. You can see a lot of his ideas in some of the intellectual currents of the late twentieth century. Miles deconstructs the very idea of reason and presents it as a form of unreason, an expression of male anxiety about women and the need to control things. While witch burnings and persecuting religion are commonly thought of as irrational, Miles presents them as an actual result of the mania for rationality. As a rational Christian who sees God and logic as fundamentally the same thing, I disagree with this idea, but I find it fascinating to see stuff I have studied at university coming out in Doctor Who. The big inconsistency in the concept, of course, is that the Carnival Queen, the embodiment of unreason, actually does engage in logical argument and reasoning (thus proving reason is fundamental to both discourse and knowledge).

Miles portrays the Seventh Doctor well (which is a shame, because it's his only Seventh Doctor novel. Come on, Larry, make peace with Big Finish, then you can write lines for Sylvester McCoy!). Roz comes across a bit like Bernice at times, but still has something to surprise. Her attempt to 'summon' the Doctor by attempting to kill Abraham Lincoln's father is mind-boggling. Chris comes across as a very likable character (he comes up again in two of the Faction Paradox books).

If you think that Paul Cornell books are a bit too rich in continuity references, you would be shocked by this novel. Christmas on a Rational Planet references nearly every single Doctor Who story. I love the way the vision of the future is narrated:

The centuries passed and America fell, but its curse lingered on. There in the future, there were two power-blocs, just as there always had been, and if they weren't the USA and the USSR, then they might as well have been. Ion-jet rockets pushed the frontier out into space, men with cowboy moustaches and stupid accents spreading their gun-law across the cosmos.

Finally, the Earth died by fire, great arks carrying humanity's leftovers away to safety. There were black-skinned slaves on the ships, same as always. The slaves were rough-skinned, one-eyed, and extraterrestrial, but a slave was a slave was a slave.

This is such a beautifully poignant commentary on the Doctor Who history of the future and how it ties together.

The New Adventures often had an unfortunate tendency to kill off characters. Miles rightly rejected this and in an interview once boasted that despite the violence of the book, it has a body count of zero. Miles would never have fallen into the trap of killing off the Master then resurrecting him then killing him off and then resurrecting him and then killing him off ad infinitum.

The Carnival Queen is a great villain, or can we call her that? She is certainly an antagonist of the Doctor. It's quite nice to have the Doctor faced with an opponent who is not only female and non-ranting, but also has the kindest of intentions. As with other god-like beings in the Whoniverse, she can only be defeated by conceptual means, hence the test of trust that decides the ending.

The Gynoid is a bizarre, but intriguing concept. The idea of relating gender to androids and gynoids is masterfully clever and is futher proof that Miles had been reading lots of postmodern feminism. I love the mysterious description of Gynoids "Gynoids aren't 'built.' Only Androids are 'built.' Gynoids just are."

Christmas on a Rational Planet lacks the intensity, pace and plot of Alien Bodies, but it is a brilliant New Adventure and shows just how deep Doctor Who can get. This novel offers a completely new way of looking at the cosmology of the Doctor Who universe and the ideology behind it. This was Lawrence Miles' great contribution to Doctor Who.
Posted by Matthew Celestine at 08:49