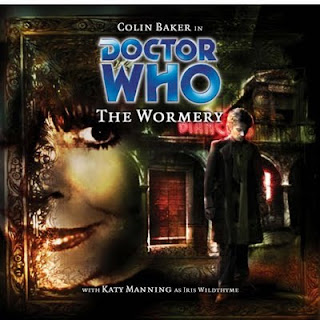 I think I can safely say that The Wormery is the most entertaining Big Finish I have heard so far. It has such great sense of fun and frivolity that is thoroughly grounded in the imagery and themes of cabaret. For the most part, The Wormery also feels refreshingly original.

Iris Wildthyme was first introduced by Paul Magrs in the BBC novels. She is a marvellously entertaining character, particularly in the way she is a bizarre parody of the Doctor. This is particularly well exploited here in that the story mirrors the Trial of the Time Lord, a recent memory for the Doctor, with Bianca turning out to be an evil version of Iris who is intent on stealing her regenerations. Hilariously, the Doctor is outraged that his own adventures are being copycatted.

Katy Manning might have played the worst Dr. Who companion ever, but all his forgiven after her portrayal of Iris Wildthyme. Katy is simply glorious as Iris. Maria McErlane is also great as Bianca, coming across as delightfully camp.

The Wormery offers much exploration of the character of the Sixth Doctor. We see his inner turmoil after the events of the trial and his deep loneliness. We discover his secret affection for Iris; he is very cross when she reveals that she does not care for this incarnation (though she later changes her mind and concludes that he is very 'cuddly').

This story is certainly a lot better than The Ancestor Cell, a novel that Stephen Cole co-authored (review coming up eventually). Interestingly enough, the background of the worms is remarkably similar to the theory about who The Enemy are in The Ancestor Cell. The Wormery does have a few faults. Its plot is confusing. It is also not much of a surprise when Sylvester McCoy makes a cameo at the end. I also felt it ought to have been a little more obvious that many of the patrons of the bar were from other worlds.

The song that Iris, and later Bianca, sing is wonderfully catchy and is so true to Iris' character. It is a real shame that it was not included at the end as a music track, as Big Finish might have done had this been put out more recently.

The Wormery is one of the best of the Big Finish range and a great introduction to Iris Wildthyme for those who missed her in the BBC books.
Posted by Matthew Celestine at 03:41