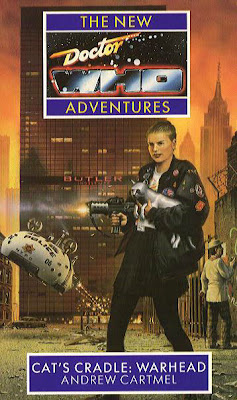 This novel is regarded by some people as being one of the defining classics of the Virgin New Adventures. On the other hand, it is a book that is hated by many more traditional fans. Cat's Cradle: Warhead was the first punk rock Doctor Who novel; it stuck it's finger up at everything that fans would want and expect from a Doctor Who novel. The things which so many people love about Doctor Who are swept away and Andrew Cartmel served us up something much darker and more brutal. We get a cold and calculating Doctor who punishes people, a thuggish Ace, an horrible glimpse of the near future, no monsters and we don't even see the TARDIS in this book. This is almost Anti-Who. For that very reason, I think it is a great novel.

Andrew Cartmel was unusual amongst Doctor Who script editors in never actually writing a Doctor Who script itself. One naturally wonders whether this has anything to do with the most interesting stylistic feature of Cat's Cradle: Warhead; it's minimal use of dialogue. So many scenes in this book go by with only a few words being spoken. The Doctor and Ace don't seem to talk much, which makes it distinct from other NAs, which made the relationship between the Doctor and Ace central to their themes. This absence of speech helps to generate atmosphere. It does, however, make it somewhat difficult to follow the complex plot. Cat's Cradle: Warhead is a book that definitely requires a second reading to be really understood. Another interesting stylistic feature is the non-linear narration. We meet Bobby Prescott and find out that he has witnessed a terrifying event before that event is narrated in a later chapter.

Andrew Cartmel's aim during his tenure as script editor was to add mystery to the Doctor. Viewers had become too used to knowing about the Doctor; that he was a Time Lord from Gallifrey, that he travelled in the TARDIS, that he was a kindly cosmic hero, etc. Cartmel continued that pursuit of a mysterious Dr. Who in his debut NA. He presents the Doctor as a force of nature, an unstoppable, unknowable, mysterious figure that manipulates all manner of events.

What I found most striking about the Doctor is that he passes judgment on people. Maria, a cleaner who is dying of the plague affecting so many in this period, helps the Doctor and then asks him to take her with him. He refuses because she knew about terrible cruelties and kept quiet about them. She has failed the Doctor's moral test and he deems her unworthy to be among his chosen few. It's impossible to imagine any other incarnation of the Doctor doing this. Perhaps another Doctor might have made a speech to her about her moral failing, but not quietly and coldly reject her in the way the Seventh Doctor does here. Perhaps this is the right moral verdict, but there is something terrifying about the way this Doctor rejects the pleas of a dying woman and abandons her to her fate.

The Doctor again passes judgment on Bobby Prescott, a serial killer who has been preying on teenagers. The Doctor hires a gang of teenagers, Prescott's would-be victims and gets them to hunt him down. After the Doctor has obtained from Prescott the information he requires, he asks him why he kills young people. He offers him a chance to justify himself. Prescott instead talks about his childhood, proving himself to be an utterly self-centred character. The Doctor ignores his pleas for mercy and abandons him to be killed by his would-be victims. It is terrifying to see the Doctor acting as an avenging angel; dealing out death and judgment. It's an uncomfortable idea, but I think it is a more powerful one than that of the Third Doctor who would always end up having mercy on the Master. The chapter with Bobby Prescott is a great moment in this novel.

Ace is not well developed in this novel. We don't get much exploration of her personality for the most part. What we do get is a picture that revolts a lot of 'Trad' fans. Ace in Cat's Cradle: Warhead is pretty much an hired thug. She is a brutal and confident heavy who is there to do the Doctor's dirty work. This is not how Sophie Aldred played the role and it is totally contrary to how many fans like to think of the role of companion, but it fits totally with the darker vision of the New Adventures. Ace is somebody who the Doctor has picked up and fashioned into a weapon. When Davros talked about the Doctor turning ordinary people into weapons in Journey's End, he was certainly right regarding NA Ace. Ace is given a nice exchange of dialogue with Justine in which the two characters challenge each other's belief systems. This dialogue creates a fascinating sense of uncertainty about the real worldview of Doctor Who. During Cartmel's time on Doctor Who, the show veered away from science fiction and introduced a remarkable magic realism or fantasy element. In this story, the Doctor's solution to the technological menace is a boy with magic powers, call them psychic powers if you will. This is worlds apart from Seventies Doctor Who were everything could be explained by science and the Doctor solved every problem with a gadget. This is New Age Doctor Who.

Andrew Cartmel seems to celebrate alternative youth cultures. He identifies the Doctor with the youths who delight in paganism, magic beliefs, environmentalism gothic culture and geeky computer games. This reflects the way Doctor Who was changing at the time. Doctor Who had fallen from the public consciousness. It was no longer an institution, but was becoming the preserve of fans, many of whom were Goths and geeks. The Doctor is not a cosy institutional figure here, but is a symbol of rebellion and chaos.

Andrew Cartmel defined the Seventh Doctor era and with this novel he helped to establish the direction of the New Adventures. Cat's Cradle: Warhead is not as enjoyable to read as Paul Cornell or Steve Lyons' NAs but it outclasses most of the Virgin novels in style. It is one of the most important Doctor Who books of the 1990s.
Posted by Matthew Celestine at 07:28