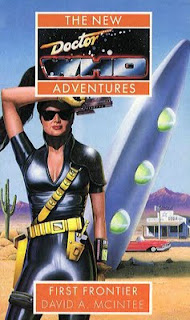 The Doctor: If you were sleepwalking, it must have been quite a nightmare.
Jack: You wouldn't know.
The Doctor: Don't be too sure; I once had one where all my old foes chased me round a soap opera.

I'm not keen on the Master. I think one of the strengths of the New Adventures novels is that for the most part they kept the Master out of it. Until First Frontier. The Master is mostly handled well. He actually comes across like Ainley rather than Delgado. It's helpful to get a story of how he recovers his Time Lord nature and nice to revisit Survival. On the other hand, his confrontation with the Doctor at the climax is depressingly predictable.

First Frontier does a good job of portraying paranoid America in the 50s. The Tex-Mex food helps to give it a sense of being a real place. Perhaps the novel would have benefited from a little more humour relating to the UFO themes. It is generally agreed amongst fans that the biggest strength of this novel is in its in depth portrayal of the alien Tzun. They are given an history and one is made to sympathize with them.

McIntee includes a lot of action in the novel. This is unfortunate, because like a lot of NA writers, he is not very good at describing it. Despite the action, the book does have a fairly slow pace.

MCIntee captures the Seventh Doctor rather well. Ace is very well portrayed and the references to the changes brought about in her by Survival are good. Bernice is also nicely portrayed, even if she is not left with much to do. I like the fact that she comes across as quite ignorant of the culture of the time period. In some novels, Bernice was a given an unbelievably comprehensive knowledge of the Twentieth century. The vast majority of minor characters in the book are military types who are not terribly interesting.

For those wanting to see how the New Adventures handled the Master, this is definitely the book to read. It's not brilliant, but it occupies an important point in continuity.
Posted by Matthew Celestine at 10:17