War of the Daleks, by John Peel (BBC novel) 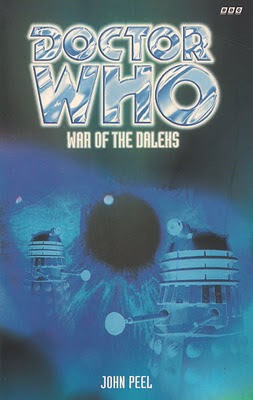 A novel for kids who love Daleks.

One thing that strikes me about War of the Daleks is how easy it is to read. I think a child of 10-12 would have only a little difficulty reading this novel. I am pretty sure I would have loved it at that age. John Peel definitely stuck with the style he had followed when writing Target novels. Peel's prose is not well developed and his characters constantly make bluntly moralistic speeches at each other, but the simple readability of this book is a relief after all the heavy NAs I have read. I love the Virgin New Adventures, but some of them could be a chore to read. Peel is much better than most NA authors in his ability to describe combat and make it exciting. The battle between Thals and Daleks in the first chapter owes an awful lot to the influence of Empire Strikes Back and Return of the Jedi.

War of the Daleks is not simply a Dr. Who novel with lots of continuity references; it is a novel about continuity. It has become rather notorious for it's complete revision of Dalek history. According to this revision, the Daleks occupying earth in the 21st century discovered documents that revealed the events of Remembrance of the Daleks. Realising the futility of changing the course of history, the Daleks planned to prevent Skaro's destruction by manipulating the timeline. The planet Antalides was cleared of life and made up as a fake Skaro. Davros' body was retrieved and left on Antalides. The Dakeks then created the robot race of Movellans and used them to create a fake war, justifying the Dalek's desire to restore Davros to their circle. Davros was then allowed to get tangled up in the quest for the Hand of Omega and to destroy the fake Skaro.

As a big fan of the manipulative Seventh Doctor and Remembrance of the Daleks in particular, I am not happy with the denial of the destruction of Skaro. It cheapens that story and makes the Seventh Doctor look like an idiot. There is some hint in the story that the revised Dalek history might be unreliable and propaganda from the Dalek prime. The problem with that is that the Thals seem pretty sure that Skaro is still around. I have no idea if the mention in an interlude of an aquatic planet also called Antalides is supposed to be a clue or just a stupid error.

What I do like about this retcon is the way it offers new light on the relationship between the Daleks and Davros. I personally think the creation of Davros was a mistake and it was criminal to include him in a succession of five Dalek stories. The presence of Davros had a tendency to undermine the potential of the Daleks, reducing them to just metallic heavies. War of the Daleks turns the tables and presents Davros as an unstable moron who is easily manipulated by the Daleks. The Daleks reject the notion that he is there creator, pointing out that the Kaleds were already on a course of evolution into a mutant race because of the war with the Thals. I love the way that the Dalek Prime concludes that Davros is an unstable menace:

'So you elected to risk destroying the Dalek species instead of exercising reasonable caution, the Dalek prime pointed out. 'You aimed for the position of ultimate power and failed. In the same way you tried to take over control of the Dalek empire- and failed. If you had achieved the power you desired, only the Daleks you created would have shared in it. None of the Daleks here on Skaro would have been a part of your plan. You would have utilised your power to annihilate us.'

For all the faults fans have found in War of the Daleks, it's great contribution lies in making the Daleks a formidable and cunning opponent. The intelligence and foresight in the Dalek strategy is incredible. These seems like the sort of thing that the Time Lords and the 'Enemy' get up to in Lawrence Miles' Faction Paradox universe. It certainly shows far more intelligence than the silly sledgehammer tactic of wiping out the Daleks at their creation in Genesis of the Daleks (I suspect the Time Lords were actually just playing a dirty trick on the Doctor for a laugh).

John Peel spends an awful lot of time explaining the plots of the various Dalek stories. Some of this is necessary in expounding the revised Dalek history, but it also reinforces my opinion that this novel is aimed at very young fans who have not seen many Dalek serials. The reference to Rachel Jenson in Remembrance of the Daleks is viewed by some as a gratuitous continuity reference. I don't mind because I think she was one of the best non-regular characters to appear in the show (delightfully played by Pamela Salem). Interestingly, he describes her as being in her mid-thirties. I had assumed that she was rather older, as she was talking about retirement. Having her in her mid-thirties fits in with Craig Hinton's novel Millennial Rites, in which we learn that Jenson was scientific advisor to the Cabinet until Anne Travers took over in the 1980s (Millennial Rites is one of the few Doctor Who novels that takes a 1980s view of UNIT dating). Remarkably, Rachel Jenson is actually more crucial to this plot than you might think. It is through her that the Daleks know about the Hand of Omega and Davros' destruction of Skaro. This does not quite fit what we see on screen; Jenson actually appears to be completely baffled about what is going on between the Daleks and the Doctor. Similarly, Peel had forgotten about the events of The Daleks. He wrongly implies that the Doctor was selfless in helping the Thals, when in fact he was trying to recover the fluid link.

The interludes offer some great Dalek action and are very fun. Despite the obsession with continuity, this is very much a book for kids. I would highly recommend this book to younger Doctor Who fans. A second-hand copy of War of the Daleks would make a lovely present for a boy or girl who loves the Daleks.
Posted by Matthew Celestine at 07:53