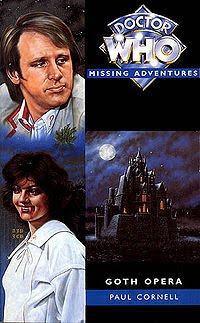 Tegan flicked open a page and began to read at random and with force, drowning out the vampire's words. She kept on walking until she was nose to nose with the creature. 'You can't lay a finger on me, can you?' she told him. 'I've got a good book in my hands, and a dirty great snake in my brain, so get back!' She emphasised the point with a finger stuck very nearly up Jeremy's nose. 'Or I'll bite your head off.'

These days I don't like vampire stuff very much at all. I was introduced to the Anne Rice books when I was when I was 17 and read quite a few of them, though all the sex did bother my conscience. I also developed a collection of vampire movies that I destroyed about seven years ago when I decided they were not very edifying. Nevertheless, within the Doctor Who mythos I am quite fascinated by the idea of an ancient conflict between the vampires and the Time Lords. Goth Opera homes in on why this conflict seems so appropriate- the fact that there is a similarity between the immortal, invulnerable vampires and the immortal, invulnerable Time Lords. It is Goth Opera that first suggests the notion that the Time Lords gained their ability to regenerate from the vampires, a notion repeated in Lawrence Miles' Book of the War.

Paul Cornell is a great writer and it's hard to imagine him giving us a bad novel. Goth Opera maintains the standards to which he had kept in his New Adventures. Cornell liked to go to town on continuity references and he pushes it a little too far in describing Romana's escape from Ruath, an escapade that sees her ending up in a Drashig-filled miniscope, meeting Sabalom Glitz, before being rescued by Castellan Spandrell. It's a silly incident, but one can't help finding it funny.

Continuity-wise, this book is closely connected to Terrance Dicks' New Adventure, Blood Harvest. It would be helpful for readers to have read this before embarking on Goth Opera, but it can still be enjoyed without the knowledge of the events of Blood Harvest.

Nyssa gets to show some much needed personality in this book. Having her becoming a vampire made her so much more interesting that I wished she would stay that way. The Fifth Doctor is also very well portrayed, showing that breathless energy that made him so likable. However, for me it was Tegan who was the star of the show. She is so fiery! I love her description of the Fifth Doctor- "a really dull Romper Room reject who'd rather play bloody cricket than do anything entertaining." Cornell dwells on the fact that the Mara's possession is a permanent change to Tegan's nature. It does seem it is rather an improvement. The best moment in the book for me was when Tegan was completely unafraid of the vampire and chases him out of her room, having been taught to deal with his sort by her Serbian grandfather.

Yarven and Ruath are rather pantomime, but they are fun. The part where Ruath sacrifices herself to restore Yarven and then regenerates was cool. It was especially interesting to find out she was the Doctor's ex-girlfriend. I loved her description of Borusa's class at the academy:

Her eyes never left the Doctor's. 'Mortimus, the Rani, that idiot Magnus. And you, Doctor. All graduates of Borusa's Academy for Scoundrels.'

I thought the vampire baby was a little too comical to fit with the darker themes of the book. The story could have done without it. Nevertheless, the rest of the characters are very well conceived. Goth Opera is definitely one of the great books of the Virgin range of novels and a superb introduction to the Missing Adventures.
Posted by Matthew Celestine at 08:00