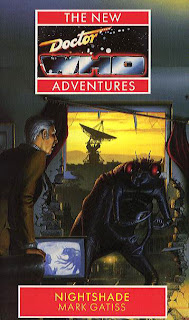 Hawthorne: 'We let this - this person and his freakish friend waltz in here without so much as a by-your-leave! Within five minutes he's telling us what to do...'
The Doctor: 'Story of my life.'


We all know that a lot of Doctor Who stories have looked to the Quatermass television show for inspiration. This had become such a well established notion that Lance Parkin actually wrote an article seeking to minimise the impact of Quatermass on Doctor Who. We even discover in Remembrance of the Daleks that Bernard Quatermass and British Rockets Group exist in the Doctor Who universe, thus making the Quatermass stories part of the Dr. Who canon. Nightshade is intended as a sort of homage to Quatermass. Not only does it feature an alien menace that would fit in well on that t.v. show, but it also makes references to a fictional show 'Nightshade' that is very obviously based on Quatermass.

Surprisingly, given his later work, this book is quite serious and lacking in humour. Not that I mind that. Some of the best NAs were quite serious and humourless, for instance Blood Heat and Cat's Cradle: Warhead. To my mind there are three problems with Nightshade. The first is pace. It is dreadfully slow. For a story with such a simple plot, it could have been made a lot faster.

Secondly, Ace's relationship with Robin is not handled very well. It never seems quite believable. I also rather doubt that Ace would be so keen to settle down in the 1960s given her very negative experiences of that period in Remembrance of the Daleks.

Thirdly, although it is quite well written, I found Nightshade rather dull. The idea of an alien entity trapped on earth which is killing people in an isolated community is such an obviously Doctor Whoish idea that there has to be some kind of new angle to make it interesting. Gatiss fails to provide one and it just feels like a very generic Dr. Who tale.

On the positive side, it's nice to see the Doctor's relationship with Susan brought up. Gatiss had clearly not watched An Unearthly Child before writing this because he wrongly refers to Susan's school uniform. Susan and her fellow pupils were not wearing uniforms in the first Doctor Who episode.

Nightshade has a reputation as one of the strongest New Adventure novels, but this seems to be mainly among those who disliked the general ethos of the Virgin stories. As somebody who appreciated the more radical experiments in the NA era, I found Gatiss' novel very pedestrian.
Posted by Matthew Celestine at 05:41