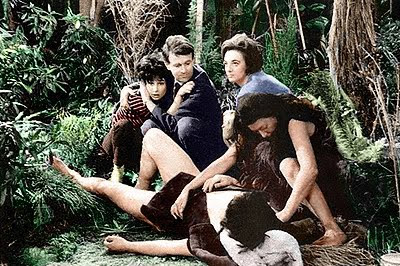 The first ever Doctor Who story! Two teachers unwittingly find themselves on a time machine with a strange old man and his granddaughter.

How do you review the first Doctor Who story? Obviously, everything else is just a sequel to this story. The temptation is to either write gushing stuff about how exciting it must have been to have seen the Doctor and the TARDIS for the first time, or else to point out all the ways in which it differs from the later, refined version of Doctor Who.

There is a tendency among fans to argue that the first episode, which introduces the Doctor, Susan and the TARDIS is absolutely brilliant and the stone age adventure with all the cavemen and cavewomen is just a stupid filler story that can be forgotten. I very much disagree with this view. The stone age story, beginning with the episode, The Cave of Skulls, is well written and acted and is vital in elaborating on the characters that are introduced to us in the first episode.

The story opens creepily, with the strange objects in the junkyard, among them the police box. This sets up the surprisingly dark atmosphere of the first episode.

The character of Susan is cleverly introduced slowly, through the recollections of Susan, enabling the viewer to build up a picture of this unearthly child. Its interesting to see how disturbed Barbara and Ian seem to be at the thought of Susan being a 'foreigner.' We see a snapshot of a much more suspicous and xenophobic society, which adds poignancy to the themes of racism in this same period that are dealt with in Remembrance of the Daleks.

Jacqueline Hill and William Russell come across brilliantly as two people thrust into a bizarre situation that they have no power to escape from. At this point, the show has not established the Doctor as the hero figure and this role falls to them. The caveman subplot reveals to us Barbara's compassionate nature and Ian's heroic resolve and ability to cope with danger and threats.

I think the moment where Susan is doing her 'Balinese dancing' to John Smith and the Common Men is such an iconic moment. It also introduces her well. We get the picture of a girl who obsesses with the popular culture and music of this society, but is somehow out of touch with it; like a British person living in Japan who obsesses over Japanese culture. Carole Ann Ford puts in a wonderful performance as the Doctor's strange granddaughter. She comes across as genuinely alien.

William Hartnell is truly the star of this story. He truly believed in the character and put his whole being into creating this strange person. Those who are used to later Dr. Who stories may be very surprised at the way the character is portrayed in this initial story. The first model of the Doctor is a character who is selfish, sinister and ruthless. It is as though the writers have not quite decided whether the man is an hero or a villain. Nevetheless, the circumstances of Barbara and Ian's first trip, into the prehistoric era, forces the Doctor to work together with his reluctant companions.

There is some uncertainty about the Doctor's motivations for taking Ian and Barbara prisoner. The pilot episode has the Doctor being concerned about changing the course of history, in the televised version, his concern is simply keeping the knowlege of himself and his craft secret. It is hard not to agree with Susan's suggestion that human minds are closed and nobody will believe what Ian and Barbara might claim about what they have seen. Remembrance of the Daleks provides a possible explanation. If the Doctor was involved in a plot to conceal an ancient Gallifreyan weapon, he might be concerned that the discovery of his ship could lead to the discovery of the Hand of Omega. It has been suggested that the Doctor might have been stealing electronic equipment, which would account for the presence of the policeman at the beginning.

It is when we leave Sixties London and head to the prehistoric age that fans let rip with a barrage of criticism. The story about the stone age cave dwellers is commonly held to be overlong, lightweight and silly. I cannot understand these criticisms. What is remarkable about episodes 3-4 of this story is how seriously all the cast are taking the story. It would be easy to send up a story about hairy cavemen and make it into comedy, but the direction has made it so earnest. It has been suggested that its hard for the viewer to identify with these primitive people. However, their struggle for survival is presented starkly to us. The power struggles amongst the tribe seems like natural territory for the drama at which Dr. Who excels. I find it hard to see any significant faults in the prehistoric part of An Unearthly Child. 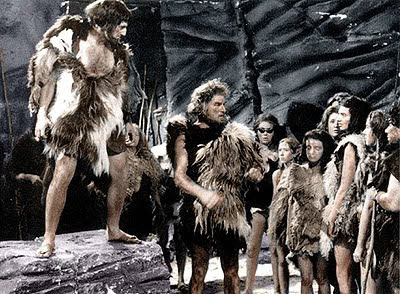 The suggestion that the writers should have taken us straight from the first episode in Sixties London to Skaro and the Daleks is deeply wrong and fails to appreciate the way this narrative works. The Doctor is perfectly comfortable on an alien planet. It is an environment he is prepared to deal with. In the Stone Age, the two modern people are at sea, but so is the Doctor. The first episode sets up the Doctor is an all-powerful figure who holds all the aces, the second episode in the Stone Age has him helpless at the hands of cave dwellers. In contrast, Ian, with his boy scout ability to make fire is much better equipped to handle himself in the Stone Age. The first episode builds up the Doctor, the following episodes build up Ian and Barbara and establish the need for the TARDIS' disparate crew to start working together as a reluctant team.

Don't be fooled by the people who say only the first part of An Unearthly Child is decent; it is entirely a gripping story.

One trivial point, notice that all the cave people are barefoot. This seems much more realistic than a lot of other primitive peoples' in science fiction who are wear unlikely leather boots. A prominent example of this is Leela and the Sevateem in Face of Evil. Leela wears a very fine pair of leather boots. Is very doubtful that the Sevateem would be able to make such finely crafted footwear. It seems much more likely that Leela would have gone barefoot like the cave people in this story.
Posted by Matthew Celestine at 04:01