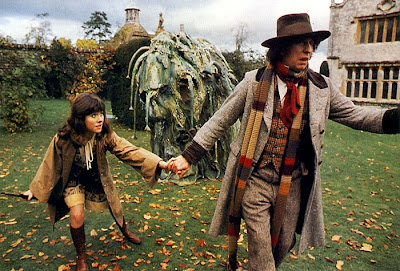 Season 13, along with Season 14 is among the most popular years of Doctor Who. That puts me into a rather lonely position in not particularly liking it.

The popularity of Season 13 is unsurprising. It has Tom Baker at his strongest. He had a good relationship with Philip Hinchcliffe who was able to keep him from trying to dominate proceedings. The Graham Williams era would demonstrate what could happen when Tom Baker was not kept on a tight leash. Most of the stories in this season are reasonably good. The production values are strong when compared to some of the disasters of the Williams era.

The strong chemistry between Elisabeth Sladen's Sarah and Tom Baker's Doctor is often cited by fans as one of the strengths of the season. I am not so sure of this. What we fan reviewers call 'chemistry' is something that you don't really see in real people having real conversations. Very few people are able to come up with a quick reply to everything that a close friend says. The dialogue between the Fourth Doctor and Sarah is just too quick, too smart and a bit too knowing. This points to the big problem with Sarah Jane Smith. No matter how popular she may be with fans, she is simply not believable as an human being. She is a composite of all the characteristics that conservative fans and writers want to see in a companion. It is as though she has been genetically engineered to be the Doctor's Companion.

In Season 13 we start to see the writers become overly reliant on reproducing the plots of famous horror and science fiction movies. In fact, every single story of this season is to varying extents, a Doctor Who adaptation of another film or story. Most obviously, Brain of Mobius takes after Frankenstein and Pyramids of Mars takes after The Mummy. More subtly, The Seeds of Doom is influenced by John Carpenter's The Thing From Another World. I think it is a fair to describe the Hinchcliffe producership as a 'one-trick pony.' For all the faults of the Graham Williams era, his producership at least offered a wide variety of different kinds of stories instead of the one-note reliance on horror. In my judgment, the Season 18 attempt at the Hammer-style, State of Decay is far superior to these Hinchcliffe horror serials by virtue, not only of it's being a one-shot attempt, but also by a far more polished production.

Related to the horror aspect of this season is the increasing violence of the stories. I don't view the Doctor as a pacifist and resent the suggestion of later writers that the Doctor never kills (one of the few things I liked about The End of Time was the Tenth Doctor's admission that he had killed people in the past). He is not Batman or Superman. I don't have much of a problem with the Doctor killing Solon with cyanide gas. I just feel that there is a bit too much death and violence in these serials. While the violence is mostly fantasy and unrealistic, there is often a suggestion of gruesomeness. There seems a real desire to arouse the morbid curiosity of the viewer. I think Pyramids of Mars is particularly tasteless in having a character killed by his zombified brother and another character crushed between two robot mummies. You might not see any gore, but it is horrible and sadistic.

I think fans really need to reevaluate whether this season is really as glorious as it is generally considered.

The textbook story of alien infiltration.

What is the point of remaking Forbidden Planet without the big robot and that girl in the short dress skipping around?

Even more overrated than Genesis of the Daleks. There are so many things that I hate about this story, so I'll save further comments until I write a proper review of it. In short, a clumsy attempt to combine Hammer horror and science fiction.

A tedious remake of Terror of the Zygons with robots instead of shape-shifting aliens. The worst story of the whole Tom Baker era (at least The Sontaran Experiment was only two episodes long).

An attempt at remaking an horror classic that is not only fun to watch, but also inserts some interesting ideas.

A really entertaining story with a great script. The Krynoid is an impressive monster and Chase is a brilliant villain. On the other hand, it is excessively violent and does come a little too close to making the Doctor into a James Bond-style action hero.
Posted by Matthew Celestine at 06:11