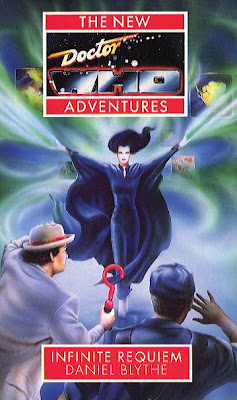 "The Doctor looked away shiftily. 'I don't have a darker side,' he attested, but without much conviction."

This novel is much better than Daniel Blythe's first NA, The Dimension Riders. That earlier work was rather disappointing. Infinite Requiem has a relatively fast pace and a strong set of characters. It has a thematic depth, with it's elaboration of two different stages of future history, it's brief exploration of British Asian society and domestic abuse and references to Hindu mythology.

I particularly appreciated the presentation of the classic NA Dark Doctor. Blythe does a fantastic job of capturing the sinister, manipulative and Machiavellian portrayal of the Doctor that had characterised the NAs. I also liked the somewhat dreamy atmosphere on the Pridka world in the far future. When Doctor Who deals with the very far future, it should have a somewhat ethereal atmosphere, a little like The Ark.

Infinite Requiem unfortunately makes the mistake of many other NA novels in killing off great characters. The deaths of Suzi and Cheynor at the end came across as pointless and unnecessary. Sometimes the New Adventure writers seemed determined to leave us all a bit depressed!

Infinite Requiem is not an earth-shattering novel that is vital to NA continuity, but it's well written and enjoyable.
Posted by Matthew Celestine at 03:32