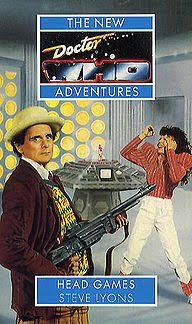 "Dr. Who's face blackened and his voice was a threatening growl.'You dare ask that? You wiped out the Seven Planets in the Althosian system, left Silurian Earth to a lingering death, and even now have friends plotting to destroy a civilized world'"

Head Games is a sequel to the author's masterpiece, Conundrum. It lacks the radical literary style of that book and is a good deal more serious, but it is still a very strong and impressive novel.

Like Conundrum, Head Games follows up the Land of Fiction first seen in The Mind Robber. The Land of Fiction is a great idea, but one that could get old rather quickly. Lyons puts a new twist on it by having elements from the Land of Fictional interacting with the real world. We are therefore given a much stronger contrast between fantasy and reality.

Head Games also follows Conundrum in suggesting that the TV Comics exist only in the fictional universe. I prefer to view those stories as genuinely part of the Doctor Who canon. I don't think this is too much of a problem. Jason, the master of the Land has based the appearance of his doppelganger Doctor on the real one, so it's quite possible that all the TV Comic references, such as John and Gillian going to Zebedee University are based on the Doctor's memories. Steve Lyons also seems to make the common assumption among fans that the Doctor is not really called 'Doctor Who.' I have challenged that assumption on this blog. The Doctor does not normally call himself Dr. Who, but that does not mean he has never used that name before.

As with NAs by Paul Cornell and Kate Orman, there is a huge amount of angst going on and Head Games brings into sharp focus the Doctor's morality. The Seventh Doctor is presented as a very morally questionable figure who uses people horrendously. The novel demonstrates this by bringing back not only Ace (who had left the Doctor in Set Piece) but also Mel. This helps to elaborate just how much the Doctor has changed since Season 24. Mel is appalled that the Doctor should associate with the gun-totting Roz and is horrified when she finds out that Dorothy is no longer that 'nice little girl.' Lyons does a bit of a retcon on her departure and the revelation only alienates her further from the Doctor and she departs from him on bad terms. The return of Ace is also effective. She has come to terms with the Doctor's meddling and manipulation, but she does not let him forget about it. She tries to help Mel comes to terms with the Doctor, but is scorned by her. It's great to see all the various companions of the Seventh Doctor interacting (just a shame it was written before Klein turned up in Big Finish- I'd love to see Mel's reaction to the Doctor hanging around with a Nazi!), though the downside is that Roz gets a bit neglected and she is not so well developed here.

Head Games follows Timewyrm:Revelation in using a past incarnation of the Doctor to challenge the Seventh. The Seventh Doctor finds himself under attack from his Sixth incarnation who accuses him of his various 'crimes' (as does the doppelganger Dr. Who and Jason). This is a little different from Timewyrm: Revelation in that the past incarnations of the Doctor were not so much real personalities as symbolic manifestations of the facets of his psyche. Some fans dislike the notion in this and other NAs, that the Seventh Doctor was somehow special and that he is the Time's Champion and the Ka Faraq Gatri. Personally, I have always liked this idea. While it is true that the other Doctors could be dark and manipulative, the Seventh Doctor does seem to be remarkably more proactive about it.

One small fault is that Jason does not really come across as a sixteen year old. Much of his dialogue and his worldview seems much more like that of a nine or ten year old boy. One thing that is definitely worth noticing is the very clever reference to the Dalek Attack computer game. Did you ever play that game? Head Games is not as magnificent as Conundrum, nevertheless it is still amongst the strongest of the Virgin New Adventures.
Posted by Matthew Celestine at 08:20