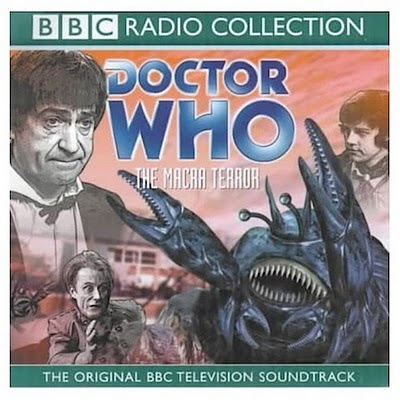 "It's just possible that you've been given a series of orders while you've been asleep. You know, "Do this", "Do that", "Do the other thing". My advice to you is: don't do anything of the sort. Don't just be obedient. Always make up your own mind."

This story shows Doctor Who at it's most liberal; challenging authority and encouraging questions about how society works. It is a quite thoughtful story. Being quite a conservative person, I struggle a little with the notion of "Don't just be obedient." As a Christian, I believe that it is in obedience to the Bible that human beings find their identity and purpose. If one rejects the authority of God's Word, one must follow some other authority, even if it is one's self and that authority will always be fallible.

I have watched this story with the telesnaps and also listened to it without. As the telesnaps are very poor quality, I think one is better off just listening to the audio. I think I very much prefer listening to Colin Baker's narration instead of Frazer Hines. Hines never quite sounded like he was taking it very seriously. One advantage of seeing the telesnaps, however is being able to see the rather surreal opening scene with the majorettes and the even more surreal music. It's nice that a similar scene with the majorettes and the same music concludes the serial. The idea of making a space colony look like an holiday camp is rather inspired. The show would again bring up these very British institutions in Leisure Hive and Delta and the Bannermen.

The Macra Terror has been criticised for attempting to do an intelligent, thoughtful story and then sticking in a bunch of giant crabs. Personally, I quite like the idea of doing a clever surrealistic story with a fun B-Movie monster thrown in for good measure. Doctor Who has always been good at working on different levels and pleasing different demographics within the audience. True to this, the script also has some nice humour, with the Doctor's jumping in the 'rough and tumble' machine in order to deliberately mess up his clothes, as well as Jamie's demonstration of the 'Highland Fling.' Patrick Troughton is delightfully manic in this story, yet shows a deep and wild cunning throughout.

The minor characters in The Macra Terror are as developed as they need to be for the story to work. The regulars stand out far more, however, with Jamie developing an ever stronger bond with the Doctor. Ben always had a tendency to get very worked up about things. Here it works quite well because of the mind control influence. I just love the moment where he turns into a Daily Mail reader and demands that the Doctor be placed in the mental hospital. Polly does a lot of whimpering in this story, but she also manages some subtle sarcasm. She tells Ola that his job title of Chief of Police 'sounds very important' and she reminds Ben that 'the voices are our friends!'

The Macra are very much a Quatermass alien. They are a force of nature that remains unknown to the end. Unlike other alien races, they do not boast about their plans of galactic conquest or their superiority and in fact do not communicate at all. We cannot be sure if they are sentient or just a form of advanced bateria, as the Doctor suggests. Lawrence Miles and Tat Wood raise the question, in About Time, of the morality of the Doctor's actions in wiping out the Macra. Of course, we have all seen Gridlock and know that the Macra were a race of conquerors, but this retcon ignores the fact that the Doctor knows nothing of them. There was no reason not to think that they were the native inhabitants of this planet. Whiling they are exploiting the humans, there is no indication that they have any plans to kill the colonists. It seems that the Doctor simply sides with the colonists just because they are less alien.

The Macra Terror is usually dated in the early phase of human colonisation. It is interesting to see the range of dysfunctional societies that are found amongst the early colonies. The colony in Power of the Daleks is full of scheming little Napoleons, the colony in The Happiness Patrol is a ruthless totalitarian state where even emotions are subject to state control, on Androzani Major, ruthless capitalism rules the day, Nightmare of Eden indicates that many early colonies were ravaged by drug addiction and in the society of this story, people are obsessed with pleasure. It seems that in the Doctor Who version of the future, mankind will take some time to adjust to living on other worlds.
Posted by Matthew Celestine at 04:56