The Roof of the World, by Adrian Rigelsford (Big Finish Audio) 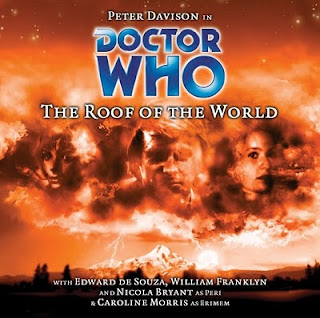 The Fifth Doctor, Peri and Erimem encounter an ancient evil in Tibet (which is not the Great Intelligence, fanboys and fangirls).

Big Finish have produced a number of audio plays set between Planet of Fire and Caves of Androzani. This is a rather controversial continuity gap. It has been argued by some fans that a lot of the impact of the Fifth Doctor's self sacrifice is down to the fact that he gave his life for somebody that he barely knew. This impact is muted if she had several unseen adventures before Caves of Androzani. I have a lot of sympathy with this argument, however it must be said that there is a good reason for creating these stories (aside from the unwillingness of Janet Fielding to work with Big Finish until recently). Peri and the Fifth Doctor make such a great team. She is a bit abrasive, he is gentle and calm. The Fifth Doctor takes some of the edge of Peri, while the Sixth Doctor just fired her up. It is natural that fans should want more stories with Peri and the Fifth Doctor.

Big Finish introduced a new companion to this TARDIS crew, Erimem (Caroline Morris), who is a princess from Ancient Egypt. I have not listened to any of her other stories so I am going to have to judge her on the basis of this appearance alone. It's great to have Peri interacting with another companion and she seems to take on a protective big sister role towards Erimem. It also seems a great idea to have a character from such a distant time in the past, especially as the potential of Katarina was so wasted. On the other hand, Erimem does not come across as particularly exotic and speaks like a typical middle-class English girl from the Home Counties. I suppose the Doctor's telepathic gift (it had nothing to do with the TARDIS until the New Adventures) might make her sound English, but one might expect an ancient Egyptian princess to speak in a quite different manner.

The story begins with the Fifth Doctor getting involved in a game of cricket with a bunch of English explorers in Tibet. There is always something heartwarming about the Fifth Doctor playing cricket; it's when he is in his element. The interaction between two groups of explorers is also quite effective.

A good deal of the story takes place in a kind of dream sequence, in which Erimem is lead to believe that she has died. The exploration of Erimem's background is useful and makes me want to listen to the The Eye of the Scorpion, her introductory story. These kind of dream sequences are a risky strategy (the NA writers seemed to go to town on them and got them right only some of the time) as you can be sure that the Fifth Doctor and Peri would not really be dead and blaming it all on Erimem. Knowing this is obviously not real makes one a little impatient with the sequence. On the other hand, with Erimem being a new and unfamiliar character, one had to face the possibility that the writer might have killed her off. I found myself checking the CD box to work out if she made further appearances just to make sure!

The big bad guys turn out to be an ancient evil, the Old Ones. It's been done before, but personally I can't get enough Lovecraftian influences in my Doctor Who. Clearly, these are not the Great Intelligence who also coincidentally inhabited Tibet. We never get a true description, but they seem to be twisted, hideous things with claws. They have apparently interbred with other lifeforms and so are clearly physical beings, unlike Fenric or the Nestene Consciousness. The Doctor mentions the Dark Times and so the Yssgaroth seem to be in view. The Old Ones here are evidently more corporeal and less powerful than the Yssgaroth seen in the The Pit. According to Lawrence Miles' Book of the War, the Yssgaroth tainted other species creating the hybrid Mal'akh, the source of the vampire legends and presumably the vampires of State of Decay. The Old Ones of this story seem to be some variation on the Mal'akh.

As ever, nobody can play creepy, sinister aristocrats with the same style as Edward De Souza. General Bruce (Sylvester Morand) is a bit cliched, but has a wonderful relationship with his companion, the frustrated journalist John Matthews (Alan Cox). The writer, surprisingly plays a minor role in the drama. The best performance comes from Nicola Bryant. Her acting has improved enormously since her television role. She plays Peri as a much more mature and intelligent character and when she appears to be angry and accusative in the dream sequence, she is very impressive. Peter Davison is good, but does not bring much that is new to the role and as with his other Big Finish appearances sounds regrettably older.

This is hardly the most original Doctor Who audio, but if you are keen to hear more of Peri with the Fifth Doctor or you need more Lovecraft in your Who, then this is worth a listen.
Posted by Matthew Celestine at 06:41