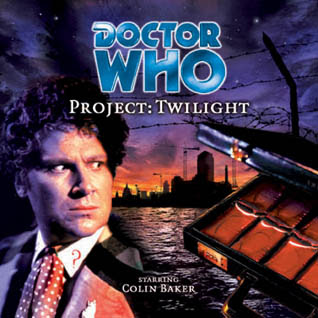 The Sixth Doctor and Evelyn encounter vampire gangsters in the London.

I absolutely hated this audio. I find it hard to see myself listening to it again.

When it comes to violence in Doctor Who, I have fairly strong feelings. I am not too bothered by the violence of the New Adventure novels. Not because I don't object to graphic literary descriptions of violence, but because I acknowledge that they were of their time. There was a strong desire to push boundaries and to make Doctor Who more adult. I don't care for the sex, swearing and violence, but I understand why those authors did it. They were not writing for a family show, but for fans who were growing up. Eric Saward is the name that tends to get mentioned when it comes to violence in Doctor Who. He certainly went too far at time; the crushing of Lytton's hands in Attack of the Cybermen was horribly unnecessary and inappropriate. On the other hand, some of the violence in the Saward era had a thematic importance. Season 21 is the story of how the conscientious Fifth Doctor is overcome, overwhelmed and eventually destroyed by the violence and depravity of the cosmos and regenerates into a form that is more accepting of violence. On the other hand, fans seem to accept and celebrate the violence of Philip Hinchcliffe's producership. It is true that the violence of the Hinchcliffe era was not all that realistic and of a more fantasy nature than much of what we see on today's small screen. However, there was a real attempt to exceed the limits of what was acceptable and to arouse the morbid curiosity of the viewer. Hinchliffe seemed to have the remarkable ambition of turning a family show into a show about torture, mutilation and gruesome deaths. So many of the serials under his producership, such as Robots of Death and Talons of Weng Chiang strike me as tasteless. Mary Whitehouse will forever be an hate figure among fans, but I do think she had a point about the unpleasantness of mid-Seventies Doctor Who.

Cavan Scott and Mark Wright seem to want to beat all previous attempts to create Doctor Who gore-flicks on the unlikely medium of audio. You can't see the violence in Project: Twilight, but there is an awful lot of it, some of it fairly graphically described and I found it absolutely sickening. I was quite unprepared for the level of horror and gore in this drama. I really do hope that Big Finish have not done many more audio drams that are this violent. I don't think that Big Finish can be excused as easily for this violence as the Virgin New Adventures. Big Finish have consistently tried to keep things 'Trad' and put out endless conservative attempts to recreate the experience of watching a Doctor Who serial. If they are going to go down that line, they should stick to the limits of that medium when it comes to possibly objectionable material.

Coming to the actual story, gore aside, it's a fairly interesting one. It has a interesting set of characters, with the exception of the stupidly cliched Reggie. Did we really need to be told that he modelled his style on the Kray twins? "No s**t Sherlock," as Janet Fielding would say.

I think this story tries a little too hard to do a vampire story without bringing up any continuity (the Doctor makes just one reference to the Time Lord's conflict with the vampires). I found that disappointing as I find the whole mythos introduced in State of Decay, with it's ancient war between Time Lords and the Great Vampires fascinating. I love the way this was followed up in the Missing Adventure, Goth Opera and with the Yssgaroth in The Pit and Lawrence Miles' Book of the War. I would have liked another installment to that mythos. The vampires of Project:Twilight seem to be a different kind. Where the State of Decay vampires were very much supernatural beings (as befits enemies of the rational Time Lords), these vampires are the product of technology. The physical change of vampirism is brought on by nanobots. Perhaps the nanobots (in this story utilised by early Twentieth Century British scientists) were the product of some alien technology that sought to replicate the State of Decay-type vampires.

Colin Baker and Maggie Stables are great as the Sixth Doctor and Evelyn Smythe. Evelyn has the effect of bringing out the Sixth Doctor's kinder, gentler side. This is nice and a positive development from the t.v. series, though I do miss the crazy, dysfunctional relationship he had with Peri. I suppose there are only so many times you can watch the Doctor being mean and Peri moaning about it.

Listen to this if you can stomach some excessive gore, but if not, stay well away.
Posted by Matthew Celestine at 07:30