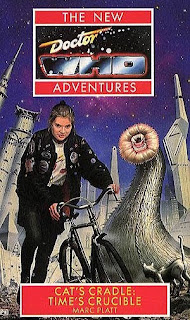 "The Ancients have much to teach, but one should not dwell amongst them forever."

Ghost Light was a serial bursting with ideas, but let down in the execution. Cat's Cradle: Time's Crucible, by the same writer is similar. It has some really interesting ideas, but they are not well communicated and make for a rather heavy, ponderous reading experience. Marc Platt's prose is heavy on description, but lacks the vitality needed to make this entertaining. He makes the bold attempt to tell a story that is non-linear in structure, with the different characters encountering each other at different stages of their futures. This could make for an interesting read, but ends up coming across as a little tedious.

The main plot is intersected with a subplot about the ancient history of Gallifrey and the rise of Rassilon. This is interesting stuff, but it is unfortunately not closely connected enough with the main plot involving Ace.

A lot of readers have complained about the absence of the Doctor for most of this story. This works in relation to the theme of the book; that is the Cartmelish exploration of the Doctor's mysterious background and his futurity (Will Be Doctor). The Seventh Doctor was always working behind the scenes and up to unseen stuff anyway. It has to be said, however, that Nigel Robinson does a much better job of working with an absent Doctor in Birthright. In that novel, the Doctor was largely absent but the events manifest his presence as though he were some incredible force of nature. This novel tries to do this, but is not quite there. It must have been refreshing at the time, however, to have seen Ace separated from the Doctor in a story for a considerable length of time. In her televised stories, Ace had been deliberately kept close to the Doctor at all time (one of Cartmel's innovations) and only Timewyrm: Revelation had Ace significantly separated from the Doctor (though not for so long).

I think the strongest element of the book is the alien monster, the Process. It is really well conceived and rather fascinating. That it moves like a Slinky is especially cool!
Posted by Matthew Celestine at 05:09