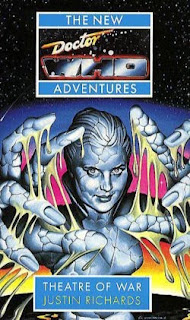 "I have been to the Eye of Orion, have been caught up in the black hole of Tartarus, been hunted through the universe by the Daleks, and played backgammon with Kublai Khan. And you say I don't know what I'm talking about? Have you ever seen the skies above Metebelis Three, tried the experiential grid on Argolis, or watched the space yachts of the Eternals race against the stars?"

This was Justin Richards debut novel back in 1994. It does not seem like a debut novel. Not only is it one of the longer Virgin New Adventure novels, but it also shows a remarkable confidence throughout. His writing style could be better and he fails to create characters that really interest the reader; nevertheless the book is full of creative ideas and imagination. I think the author would have done better to cut it down a little to make a faster paced story. The extra length does not help a lot.

It is interesting how much critical literary theory was sneaked into the Seventh Doctor era. Theatre of War is packed with critical discourse on the subject of drama and the theatre. Much of this is very interesting and makes up a little for the lack of interesting characters.

Justin Richards captures the Seventh Doctor well. He also gets Bernice Summerfield into her element, allowing her to use her archaeological skills. Ace is not used quite so well. Richards tries hard to make her likable, emphasising her horror at the atrocities committed in the course of the war. Call me weird, but I prefer Ace to be a aggressive, moaning bitch who hates the Doctor.

Theatre of War introduces Irving Braxiatel, who would become a very important character, especially in the Bernice Summerfield adventures. I can't help feeling that he comes across as a little colourless in this novel.
Posted by Matthew Celestine at 06:53