Putting Doctor Who to shame: The Day of the Triffids (1981) 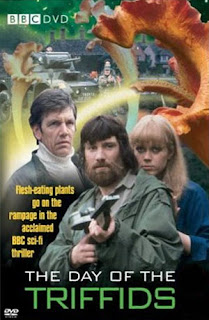 I think Remembrance of the Daleks clearly indicates that the Quatermass stories are part of the Doctor Who canon. There are also good reasons for thinking that Blake's 7 is also set in the Whoniverse (though at what period of future history, I have no idea). However, John Wyndham's apocalyptic tale clearly can't be slotted into our shared fictional universe of British science fiction. So can I justify departing from the format of this blog and reviewing something that is very clearly not Doctor Who?

The 1981 version of The Day of the Triffids has some very important connections to Doctor Who. Obviously, it is made by the BBC. Not only that it was produced by David Maloney who directed a number of Doctor Who serials, including The Talons of Weng Chiang and Genesis of the Daleks. Like Doctor Who, The Day of the Trffids series has important similarities with Quatermass. The Triffids are an utterly alien menace. Like the monsters of Quatermass, they are a force of nature that can be reasoned with or easily stopped.

John Wyndham's novel is like Doctor Who, one of the great British contributions to science fiction. It is a timeless classic that has been studied in schools. It is unlikely that there were any Doctor Who writers who had not read The Day of the Triffids. Doctor Who had at times attempted to create monstrous plants with varying results.

As a Doctor Who fan, what shocked me about The Day of the Triffids was it's incredible quality. The production values of this series were so strong that in comparison, most Doctor Who looks pathetically cheap and tacky. The direction was strong. The acting was full of conviction, free from the hamming up that was all too common in Doctor Who. The camera work was masterful and the location filming was glorious. 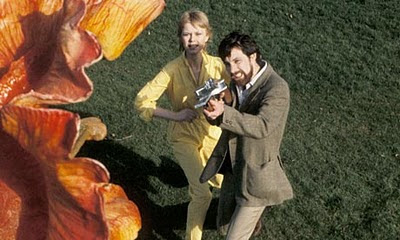 I cannot think of a Doctor Who monster that is as scary as the Triffids in the 1981 version. The props contained an operator, yet they do not come close to looking like a man in a rubber suit. They do not look like monsters at all; they look like big orchids, which is what makes them so effective. The way they are filmed also helps a lot; we are not given any long shots of them moving, thus avoiding the problem of lumbering that ruins so many well designed monsters in Doctor Who.

Even as a concept the Triffids are terrifying. They are plants. The idea of a big sunflower that stings people is nightmarish. There is also a sense of realism about the Triffids. They are blind like plants. They have no brain, yet somehow show some instinctive cunning. They also restricted to eating rotting flesh. If the Triffids had long tendrils to grab you and a big mouth to gobble you up, they would be just another fantasy monster. However, the idea of a Triffid killing you and then standing over you waiting for your body to decompose is a much more horrible thought. Very obviously, John Wyndham's novel was the origin of all those apocalyptic stories about flesh-eating zombies that are so popular these days. To my mind, flesh-eating Triffids are a scarier thought than flesh-eating zombies. I know that dead bodies don't walk around eating people, but there are carnivorous plants and so the idea of a walking, stinging plant seems very easy to imagine. 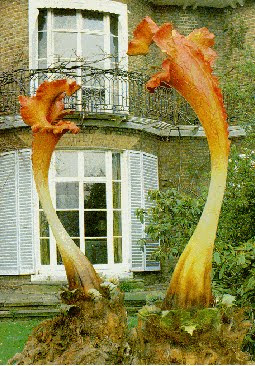 The Day of the Triffids is a very faithful adaptation of the novel. It has a much more modern setting of course and minor details have been altered. The scene at the house of the blind couple is a very helpful one in providing some exposition and the perspective of the newly blind. There is a danger with this story that we identify too closely with the minority who have their sight and become distant from the blind masses. The series engages very well with the moral dilemmas of the disaster and presents all of the different responses to it very effectively.

As I said, the location work in this series is glorious. It really captures the beauty of the landscape of southern England. I first read the novel as a child when I was on holiday in Cornwall in my parents' caravan. Thus, in my mind this story and the English countryside are quite closely connected. As they should be. It is a very British novel.

Some viewers have complained about the passage of six years in between episodes 5 and 6, but this makes perfect sense within the narrative. The point is that the protagonists are surviving peacefully during that time. There are only so many times you can watch somebody killing Triffids. In my judgement, The Day of the Triffids is a masterpiece of British television that should be watched by anyone who appreciates British science fiction.
Posted by Matthew Celestine at 11:45