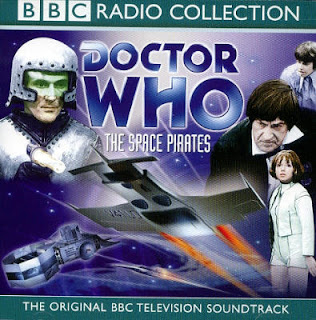 By all accounts, this story cannot really be appreciated in audio format. This is very much intended to be an highly visual story, with heavy use of modelwork to create various spacecraft. I suppose it is in part the limitation of the audio format, but I find The Space Pirates incredibly boring. It does feel awfully padded in places. Some of the plot elements feel like they have been used a few too many times before, such as the Doctor defusing a bomb at the last moment. Ending the story on a bad joke is also a bit irritating. Nevertheless, The Space Pirates is not without a few charms. One of these is the use of ethereal operatic vocals by Mary Thomas in the score. This is a delightfully atmospheric effect.

The way that The Space Pirates incorporates the atmosphere and dynamics of the western genre into the new frontier of space is is imaginative. Milo Clancy is a brilliantly conceived character who reflects that old pioneer spirit. His cheeky interaction with the snooty General Hermack is hilarious. Having him prepare food in his spaceship is also a smart idea. His accent is a bit odd, but as Lawrence Miles and Tat Wood point out inn About Time, he may not actually be American; non-English speakers using English sound American in a weird way to us native English (though apparently not to Americans).

The space pirates are a bit dull, though Caven is appropriately scary. The space corps are also not terribly interesting, apart from General Hermack. I love his plummy voice and his flirting with Madeleine is amusing. The Doctor is delightfully whimsical. One has to love the way he retrieves the green marble because it is his favorite.

As the Hinchcliffe era has not started yet, Madeleine is not miserably killed off. It's nice to see that she surrenders peacefully to the long arm of the law. In the end, she is escorted off to a (hopefully) short stay in the clink.
Posted by Matthew Celestine at 07:29