Power Of The Daleks

The newly regenerated Second Doctor smells a rat when he meets friendly Daleks on a space colony.

Its hard to review a story that has so little of the original footage. At least we have the Telesnaps reconstruction and plenty of photographs. It is a great injustice that so little of this story survives, because it is a really good one.

It must have been a bizarre experience for viewers seeing the Doctor regenerate for the first time. A lot of them found it just too much too handle. The story rather reflects this with the companions, Ben and Polly treating the Second Doctor with suspicion. Perhaps the more recent fan who is familiar with Patrick Troughton might be a little troubled by Ben's hostility and aggression towards the Doctor.

It is probably the Doctor's recognition of the Dalek's and his determined confrontation of them that reassure the viewer that this really is their Doctor.

The great thing about the Daleks in this story is their cunning. They pretend to be faithful servants of the human colonists but are plotting to exterminate them all. In later stories, the Daleks lacked this cunning and needed Davros to do their thinking for them. The Daleks ruthlessly exploit the divisions in the human colony.

Patrick Troughton gives a great perforance as the new Doctor. He has not quite made the role his own yet, but he introduces the new clown-like persona. I particularly like the moment where he avoids his companions' questions by playing his recorder. We also see something of his manic frustration as he fails to persuade the colonists of the dangers of the Daleks.

The story takes a cue from Gogol's The Government Inspector, with the Doctor impersonating the murdered Earth Examiner. David Whitaker's writing is a good deal cleverer than any of the Dalek stories of Terry Nation, who had a tendency to resort to stock plots.

Power of the Daleks has some great, well-drawn characters. The power-hungry woman, Janly is particularly well portrayed, but full marks also go to the misguided scientist, Lesterton. The evil cunning of the Daleks is matched by the ambition, arrogance and ruthlessness of the colonists. The Dalek's question "Why do human beings kill human beings?" is poignant.

The high body count in this story is surprising, one almost feels like the Saward era is here already. I am not a big fan of massacres in Doctor Who. Still, many of the colonists, like Janly, deserve their fate.

One thing I paricularly love; Polly is given a futuristic colony outfit that includes a pair of flip flops. I am glad to see that flip flops will still be in style in the days of space exploration! 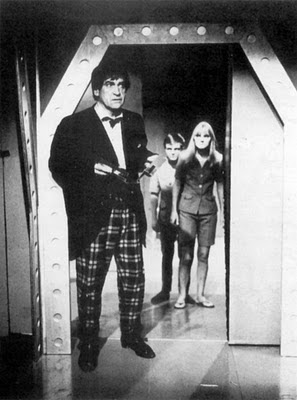 Posted by Matthew Celestine at 09:37