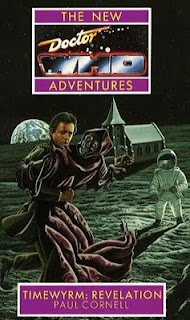 Battling the Timewym, both the Seventh Doctor and Ace confront their inner demons.

You could say this is the only book in the Timewyrm series that really matters. Exodus was a great novel, but it did not really deal much with the Timewyrm herself and in Genesys she was a fairly uninteresting and standard alien villain. In Revelation, the Timewyrm is given real significance as both a character and a concept. In this novel, the Timewyrm is portrayed very much like the female version of Kronos the Kronovore in The Time Monster, only with a good deal more malevolence.

The New Adventures promised us stories that were "too broad and deep for the small screen." Timewyrm: Revelation finally delivers on that promise. Genesys gave us a child prostitute and open references to sex, Exodus gave us a much vaster scale of events and Apocalypse gave us nothing of the sort. Revelation takes us into the very mind of the Doctor, challenging his entire raison d'etre. This is the first truly 'Rad' Doctor Who novel.

None of the first three Timewyrm novels had taken much lead from the last season of the television series, apart from Exodus' emphasis on the manipulative side of the Seventh Doctor. In contrast, Revelation fundamentally grounds itself in the ideas and concepts explored in Season 26, with the inner torment and angst of Ace and the sinister scheming of the Seventh Doctor. We see the conflict between Ace and the Doctor become increasingly volatile, preparing the way for their parting in Cornell's next novel. Like Season 26, Revelation deals with the theme of Ace growing up and becoming a mature woman.

As with Seasons 25 and 26, Ace has to confront a lot of inner demons; a childhood bully, the agonies of growing up, her relationship with the manipulative Doctor and the shallowness of the culture she has come from. Yet this story is much more about the Doctor's inner demons, for much of it takes place within his own mind.

Timewyrm: Revelation is a story of a confrontation between the Doctor's past mistakes and his conscience. It is a story of his redemption. In the realm of his mind, he encounters ghosts of Katarina, Sara Kingdom and Adric, who identify themselves respectively as the First, Second and Third Sacrifices. He also meets ghosts of the Eocene reptiles. These echoes of the past serve to remind him of his failures. We also meet his Third incarnation who reveals the shocking revelation that the leader of the Fascist England in Inferno was an alternate version of himself. The Doctor's interaction with Ace reveal his continued involvement in suspect schemes.

It is Ace who helps to redeem the Doctor. She recognises the darkness of the path he is walking and journeys into the deepest part of his mind to free his conscience. Beautifully, the Doctor's conscience turns out to be the Fifth Doctor, who is tied to the world tree (a very 80s Doctor Whoish reference to Norse mythology) and suffering from a grievous wound to his side. This revelation of the Doctor's moral self is so inspired. The Doctor finally get's to choose "another way." Instead of sacrificing Ace in a bid to destroy the Timewyrm he traps the Timewyrm in the body of a newborn child, giving her the chance to live an human life and to learn a better way.

Timewyrm: Revelation is such a beautiful story. It takes on so many literary references and allusions to mythology. Dante's Divine Comedy is one very prominent source. It has a deep spirituality to it. Revelation is definitely one of the most deeply moving of the New Adventures. It also features a wonderful recreation of the Fourth Doctor in the person of the ferryman.
Posted by Matthew Celestine at 05:31