Survival of the Fittest, by Jonathan Clements (Big Finish Audio) 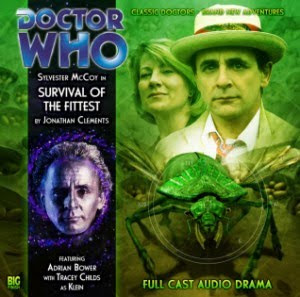 The Seventh Doctor shows Klein the universe, but can they stay friends?

This is the second part of the Klein trilogy, which sees the Seventh Doctor taking the unusual companion, Elizabeth Klein on a voyage to discover the universe. Klein is a Nazi scientist from an alternate timeline in which the Nazis won the war. This timeline was wiped out by the Doctor, leaving Klein stranded in real history.

I personally don't care for Doctor Who dealing with history being altered. I think it goes against the initial premise of Doctor Who that history cannot be altered, not one line. I know that later stories challenged that assumption and that Big Finish delight in alternate timeline stories, but I don't think it is territory that is natural for Doctor Who. Nevertheless, I really like the Klein trilogy, despite my dislike of time alteration stories. It is fascinating to see the Doctor taking on a companion who holds to a very different philosophy. Plus, it is great to see the Doctor hanging out with a sophisticated mature woman, as opposed to endless teenage and twenty-something girls. I find it easier to see the Doctor debating ideology with an intelligent lady like Klein than falling head over heels for a young girl as shallow as Rose. I might even go so far as to say that Klein is my favorite Seventh Doctor companion; I certainly prefer her to Bernice Summerfield.

This drama is preceded by Klein's Story a bonus episode-long tale, in which Klein narrates the circumstances in which she travelled back in time to the Second World War. This story features Paul McGann ("dark and handsome in a rather Gothic way"- Klein). This is pretty good. Of course, those who have listened to Colditz will know the basic story of this, but Klein's Story adds a little flesh to it. We find out that the regenerated Doctor in the alternate timeline had been aiding the victims of Nazi oppression. It is interesting that the Eighth Doctor chooses to help the oppressed even in a timeline that he is working to eradicate. It seems hard to imagine the Seventh Doctor being so distracted from his purpose.

After Klein tells her story, she is unable to understand who the mysterious 'Schimdt with his gothic good looks really was. The Doctor then makes the mistake of explaining that this is his regenerated self manipulating her within the lost timeline. Klein is horrified to realise she has been manipulated by the Doctor and determines to get even at the game. Here we come back to that old chestnut of the early Virgin New Adventures; the dark side of the Doctor. I imagine those listening who don't like the NAs must have groaned. Ace came to hate the Doctor when she realised that he was taking advantage of her with his constant Machiavellian games. Klein also comes to realise that she has been taken for a ride by the Doctor and comes to hate him.

At the start of the story, the Doctor has already shown Klein a number of worlds. This brief continuity gap opens the possibility of other audio dramas or novels featuring the companion team of the Seventh Doctor and Klein. Am I being too optimistic? Well, they can count on me to buy them. I love Klein.

The insectoid Vrill are wonderfully conceived. Jonathan Clements has thought really hard about just how sentient insects might think. Remarkably, we learn that the TARDIS gives the Doctor (and every other character, including the human adventurers on the planet) the ability to communicate with a species that use scent as a language. As much as I like the New Adventures, I am not convinced by the view taken (and later adopted by RT Davies for the BBC Wales series) that it is the TARDIS that enables communication between the crew and those from other cultures and species. The Doctor's comment about language in Masque of Mandragora suggests that it is a personal ability that he posesses as a Time Lord and grants to his companions. Given that the TARDIS crew are often separated from the TARDIS, sometimes by time and space, it makes sense that this linguistic ability is independent of it. It may be that the grant of this Time Lord gift is a permanent bestowal; Vicki did not seem worried that she would not be able to communicate with her new husband Troilus.

The human adventurers in this story are a great bunch and well played. I like the way Klein adopts a posture of superiority towards them. Despite being a Nazi, Klein oddly comes to share the Doctor's stance of opposition towards the humans' exploitation and abuse of the native Vrill. It seems that her experiences are affecting her values.

I find it unconvicing that at the climax, the Doctor ends up losing his key. I know even the Doctor is fallible, but you would think with a Nazi who is desperate to steal the TARDIS and get even on the team, he would be a bit more careful. After all, it's not like he has not been protecting that key from evil villains, renegade Time Lords, Daleks and Cybermen for hundreds of years. Needless to say, we fans know that in some stories, only the Doctor can use the TARDIS key.

The musical score is really excellent. This is a great second part to the Klein trilogy and if one has listened to Colditz and A Thousand Tiny Wings, this is definitely worth getting hold of.
Posted by Matthew Celestine at 09:46