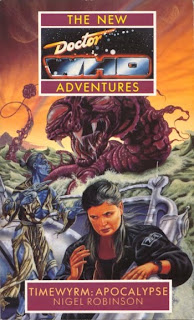 The Seventh Doctor and Ace pursue the Timewyrm into the far future, towards the end of the life of the universe.

The cover is quite good. It looks like a mass market science fiction novel of the sort published in the 1980s. The sort that invariably has a better cover than the story inside.

Timewyrm: Apocalypse is one of the weaker New Adventure novels. It attempts to tell a fairly old fashioned Doctor Who story, but ends up feeling rather little uninspiring and predictable. What is remarkable is how different this is to Nigel Robinson's second NA novel, Birthright. That was not only a far more interesting and better written story, but which also experimented more with the possibilities of what a Doctor Who novel can do.

Timewyrm Apocalypse is written in far more readable prose than Transit or Lucifer Rising, however it very much feels like reading a Target novelisation (and the author had written a few of those).

Like the previous novel, Timewyrm: Exodus, the Timewyrm arc is kept in the background. While Exodus was a great novel, it was only in the concluding part of the story arc that the Timewyrm emerges as an interesting narrative concept.

The idea of the Seventh Doctor receiving a warning from his second incarnation. It is interesting that three out of the four Timewyrm books incorporate a multi-Doctor element. I think this shows John Peel and Nigel Robinson's lack of interest in pursuing the Seventh Doctor's character and relationships. Thankfully in the Timewyrm conclusion, Paul Cornell starts to address the issues brought up in season 26, while still incorporating the multi-Doctor element.

The plot of this story takes on obvious influences from The Macra Terror, The Krotons and Revelation of the Daleks.
Posted by Matthew Celestine at 04:55