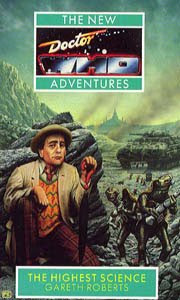 The Seventh Doctor and Bernice investigate a mysterious power known as the 'Highest Science.'

Like many of the New Adventures, The Highest Science divides opinions. Many fans regard it as one of the best of the New Adventure novels. On the other hand, a fair few readers, including NA diehards were unimpressed by it. I found it more enjoyable to read than Lucifer Rising and Deceit, but it is certainly not one of my favorite NAs. In fact, I found the next novel, Neil Penswick's much maligned The Pit, much more fascinating. I read Gareth Roberts' later novel, Tragedy Day before this and was very impressed, so I had rather higher hopes for The Highest Science.

The Highest Science is written in very readable prose and shows plenty of wit. The influence of Douglas Adams is very obvious. Some readers will enjoy that, though I am not a Douglas Adams aficionado.

This novel sees the introduction of the Chelonians, a very aggressive turtle-like race who reappear in several NAs and also get a reference in Pandorica Opens. They are a very well conceived alien race.

I agree with many readers that the Doctor in this story seems much more like the Fourth Doctor than the Seventh. Bernice does not get an awful lot to do and ends up in a rather cliched separation from the Doctor. The three young drop-outs stranded on the alien world are quite interesting.

The biggest problem with the story is the lack of resolution at the end. The Doctor leaves without really resolving all the narrative threads to the satisfaction of the reader.
Posted by Matthew Celestine at 08:01