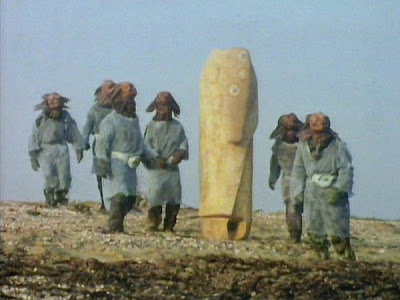 "He used to be a friend of mine once... a very good friend. In fact, you might almost say we were at school together."

Fans of the Pertwee era tend to rate this story very highly, considering it to be a classic of it's era. Those who are less favourable in their opinion of the Pertwee years have strong reservations about the merits of The Sea Devils. As somebody with a very low opinion of the Pertwee era, I find myself in the latter category. I think this is an extremely disappointing story. It is not without some great moments, but fails to deliver on the whole. It is well produced and has an awful lot of action, as well as some great moments with the Master, but very little that could be described as thoughtful or intelligent. 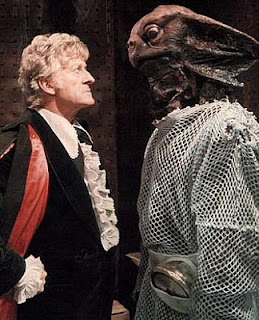 The Sea Devils is often described as a sequel to Doctor Who and the Silurians because it features an aquatic variation of the prehistoric creatures in that story. A sequel needs to justify itself with some fresh ideas and variations on the original story. The Sea Devils has the Master and it has a maritime setting, but this is all. There is not much exploration of the fascinating idea of the Eocenes as the original inhabitants of the earth. The race memory thing that was so important in Doctor Who and the Silurians is noticeably absent.

The Sea Devils is far too long. Doctor Who and the Silurians was also a very long story, but each episode made a real impact and pushed a complex and effective plot. The plot of The Sea Devils does not sustain itself so well. The material is fairly strong up until the death of Trenchard and the end of the prison plot. After that point the story gets boring very quickly.

Like many other Pertwee stories, The Sea Devils spends an awful lot of time indulging the lead actors love of different modes of transport. The Doctor is not James Bond. It does get tedious to see Pertwee pretending he is an older version of 007. The story also spends a lot of time acting as a recruitment poster for the navy. There is a clear message-

"The Royal Navy is cool! Doctor Who says sign up now, kids!"

On the other hand, as somebody who is generally hawkish on foreign policy and a bit right-wing, it is refreshing to see an alien menace that can easily be dispatched by our armed forces. There is never any sense that the Sea Devils are any real threat to our Queen and country and we are left in no doubt that our forces could wipe them out of the water with a few coordinated missile strikes. For once, mankind actually has the upper hand. This might make a nice change, but it does not fit at all with the Quatermass-like ethos of Doctor Who and the Silurians, where an ancient alien intelligence was a clear menace to humanity.

The Eocene 'Sea Devil' creatures are well designed. Terrance Dicks cruelly mocked their netting tunics, but I think they look good. The problem is not with the appearance of the Sea Devils, but the way they are presented. Only one of them speaks. They are summoned and directed by the Master's radio device, which rather makes them seem like zombies. There is a real lack of personality and identity about these creatures, in great contrast to the Eocenes in Doctor Who and the Silurians. For a change, these monsters are not immune to bullets, though given his fact it is surprising none of them are killed or seriously wounded in the firefight at the prison.

I am not a fan of the Master. I think giving the Doctor an evil alter ego was a bad idea, as it just makes him into a shining white knight in armour, a figure of unambiguous saintliness. Nevertheless, it is safe to say that Roger Delgado steals this show and makes it worth watching. He has some wonderful moments, his swordfight with the Doctor, his exasperation at Trenchard's inability to get his joke and his laughter after pretending to have reformed. The Master might have been a bad idea of Letts and Dicks, but he is good camp fun. 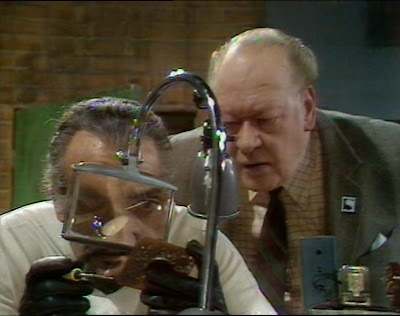 Trenchard is also a great element in this story. Clive Morton really captures the part of a stuffy old colonial governor with a paranoid tendency. There is a real sense of tragedy in the way his patriotism has been exploited and manipulated by the Master. It's great the way the Master sends him to distract Captain Hart by harping on about his golf tournament.

As with many Pertwee stories, there is a pompous civil servant/ minister type to act pig-headed and overbearing. This time it's parliamentary private secretary Walker. His character is unfortunately far too caricatured to be convincing, particularly when he is revealed to be an horrendous coward. He is given some terrible dialogue.

In this story and in others of the season, we have that awful Jo Grant woman to torment us. She really was the worst companion, far more irritating than Adric in my opinion. Thankfully, she is a little more bearable in this story than in many of her other serials.

Please don't be fooled into thinking this story is a classic.
Posted by Matthew Celestine at 06:19