Doctor Who Effects and Ironic Pleasure 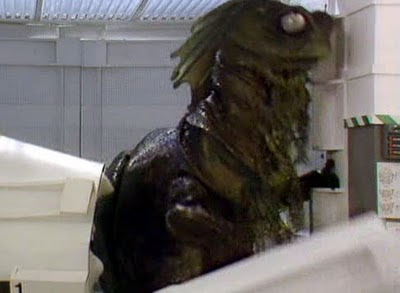 On the DVD commentary of The Stones of Blood, Tom Baker, Mary Tamm and Susan Engel (who played Cessair of Diplos) seemed to agree that a major part of the enjoyment of Doctor Who is the cheapness and tackiness of a lot of the effects. So they said in episode two. Yet when they got to the next episode and saw the Megara Justice Machines, they immediately started complaining about how awful the effects were and how much it ruined the final two episodes! This goes to show that the comment that fans always love the tacky effects is in fact patronising nonsense.

We fans know the limitations on the classic series resulting from BBC budgets. We know this and accept it. We are able to suspend our disbelief and just enjoy the story despite tacky effects. That does not mean that we always take a completely uncritical stance towards anything they put on the screen. There are some stories where we fans want to scream "You're not even trying!"

I think it is different with what you might call 'casual fans' of the show. I have a colleague who has always enjoyed Doctor Who (though he hated the Matt Smith season and gave up watching that), but who does not own a single DVD and could not name a single Doctor Who title. The other day he said to me that a major part of the enjoyment of Doctor Who is the lameness of the special effects. I am convinced that if he were to start watching DVDs of the classic series on a regular basis, his perspective would totally change.

Imagine somebody who has not watched classic Doctor Who since the 80s or maybe the handful of repeats shown in 1993. He purchases a DVD of The Creature from the Pit. The major part of his enjoyment is likely to be the contrast between his innocent delight he took in the show when he was younger and his present day consciousness of the cheapness of it all. It's a dreadful story, but he can still get a real kick from laughing at that.

Suppose this person then becomes a more committed fan and purchases other Doctor Who DVDs. He then has a framework of reference by which to compare different stories. Now that he is watching other stories he begins to look beyond the cheap effects and notices the quality of the direction, the acting and the script writing. The big rat in The Talons of Weng Chiang starts to appear more painful because of the awareness of how brilliant the other elements of that production are. The cheap effects in The Creature from the Pit start to look less charming because they are not backed up with the redeeming features of a story like The City of Death. The pantomime Myrka in Warriors of the Deep starts to become more painful when you realise how effective it might have been if it had just been filmed differently. In contrast the cheap horror effects of The Image of the Fendahl are made to work through the intense atmosphere that the production manages to generate.

There is so much to appreciate in Doctor Who. Yes, the cheap effects can be a laugh sometimes, but a really critical appreciation of the show can add so much more to one's enjoyment.
Posted by Matthew Celestine at 03:03