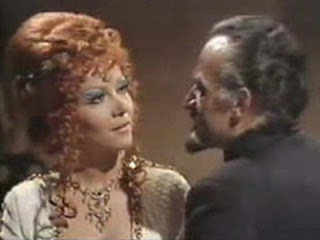 The Master is up to his usual tricks and summons up Kronos the kronovore and also has fun with an Atlantean queen.

John Pertwee is my least favorite Doctor. I can't stand Jo Grant, she really was the most awful companion, worse than Adric. I also consider the Master to be a really boring villain. Yet strangely enough, I often do find myself enjoying John Pertwee stories.

Roger Delgado gives what is probably his best ever performance in The Time Monster. It is also really cool to watch the Atlantean queen instantly falling for him and getting seduced by the dastardly arch-villain. As much as we fans want to insist that the Master is best when he is grim and evil, we all really like him to be dashing, camp and mustache-twirling.

Being a huge Lovecraft fan, I really like the idea of Kronos and the Atlantis plot. Ancient gods are cool. Having Kronos become female at the end is really interesting. There seems to be almost the suggestion in Kronos' dialogue that s/he is a kind of divine representation of time itself.

The story is hardly perfect. Like many Pertwee stories, it is far too long. Katy Manning has some awful dialogue (though I do like the "How about, 'curses foiled again'" line). The Atlantis set looks woefully cheap and small.

The minotaur is a dreadful creation. One almost wishes it was the Nimon. I find it strange that a half-man, half-bull would take the trouble to put on a loincloth and a pair of shoes. He is not even in a proper labyrinth. He is just there for a filler moment.

The bit with the Roundheads is rather disastrous. Why does the battle last so long when it is Automatic weapons against Flintlocks?

For all its faults though, The Time Monster is so full of a spirit of fun that it is impossible for me to dislike it.

Its nice to see Ingrid Pitt in a decent role. She is hardly the greatest actress to appear in Doctor Who, but she makes a good impression here.
Posted by Matthew Celestine at 02:33