The One Doctor, by Gareth Roberts and Clayton Hickman (Big Finish Audio) 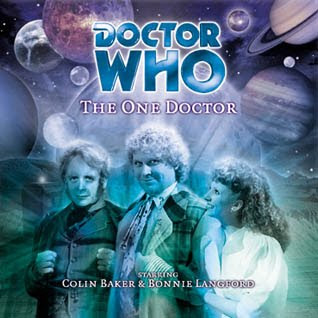 The Sixth Doctor and Mel arrives on a planet in the far future to find that the wonderful time traveller known as 'the Doctor' and his pretty assistant Sally-Anne have saved the day.

Whatever people say, I think Colin Baker was a great Doctor. Despite his being sacked after two seasons, Big Finish thankfully granted us the chance to hear him again in audio and in this medium he really has the chance to shine. In this audio play, Colin Baker is given the opportunity to display his aptitude for comedy, something that he was not able to display so much during his television stint.

The One Doctor is a full-on comedy. This is something that the television series never did. Even the most comedic serials such as The Two Doctors and The Pirate Planet had plenty of serious elements. In fact, Delta and the Bannermen one of the stories that comes closest to comedy was probably envisioned as a much more serious story. One could even argue that the generally more po-faced Star Trek: Deep Space 9 came closer to full-on comedy than Doctor Who. I am all for experimentation with different styles of Doctor Who, so I think it was worth the effort. I can't help thinking though that an attempt to pastiche Doctor Who would work better in a more serious story, which I would argue is what The Two Doctors comes close to doing, though with an anarchic sense of satire. I would argue that the comedy in Bang-Bang-a-Boom! actually works better because it is aimed at Star Trek rather than Doctor Who, effectively neutralising the incongruity of it.

The One Doctor is funny, if not hiliariously funny. It is a lightweight story that you can enjoy and pick up all cool fan references in. The central concept of a conman impersonating the Doctor is a great one and this element works pretty well, even if the story get's a bit tired halfway through.

The plot structure closely follows The Keys of Marinus, with the characters splitting up on a quest to receive certain objects. Thus, we have three very lightweight mini-adventures. One of them has been rather upstaged by the BBC Wales series, though thankfully this story felt no need to make the Anne Robinson send-up so obvious (though Jane Goddard does a great impression). I am not a big fan of Matt Lucas' work, but it's nice to hear him in this drama. I would say pretty much all the cast of this story do a fantastic job.

It is lovely to hear Bonnie Langford alongside Colin Baker again. They worked so well together in season 23, so it was such a shame that they only had two televised stories. Big Finish have done their work well and enabled us to relive that era of the show. Bonnie is such a great actress. Admittedly, she does sound rather different to how she sounded on t.v. However, in this story she comes a lot closer to the television Mel than she does in some of her other Big Finish stories. Mel in The Juggernauts almost comes across as a different character to that of seasons 23 and 24. The One Doctor does not miss the chance to send-up the character:

Mel's 'Bush's never give' speech is delightful, even if you can see the punchline coming.

This story is set in what the Doctor describes as the 'vulgar end of time,' when everything has been explored, everything that can be known is known and there is no longer any mystery about anything. The Doctor hates this period and seldom travels this far into the future. This is probably the same period as that of Delta and the Bannermen, as in that story all the alien races seem to know about the Doctor and they all posess time travel.
Posted by Matthew Celestine at 10:38