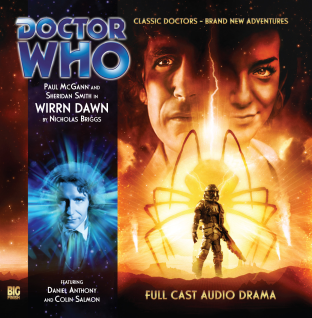 In the grim darkness of the far future, humanity is at war with the Wirrn. The Eighth Doctor and Lucie sort of get involved...

This is the first Eighth Doctor audio that I have listened to, unless you count Paul McGann's appearance in Survival of the Fittest. I thought he gave a reasonable performance, even if not the most inspiring Doctoral performance I have heard.

Deep down every Doctor Who fan wants to see old monsters return and so a story like this has an obvious appeal. Being on audio, we are freed from the disadvantage of seeing unconvincing monster props.

The CD booklet contains some really good artwork. This is thankfully not the only good thing about this drama. It does a great job of capturing the horror and destruction of a space war and has plenty of menace and visceral horror (without the realistic violence and gore of Project: Twilight). Starship Troopers is an obvious influence, but this is rather more serious. There is wonderful dramatic tension created when the female military officer harvested by Wirrn begs for death.

Call me a bit gung ho, but would a battle between giant bugs and humans last so long? I mean, the Wirrn can't manufacture bombs or bazookas can they?

This story is far from perfect. It is absurd that the Doctor should be puzzled by what an 'Indig' is. The characters are rather one-dimensional. Worst of all, the Doctor does very little in this story. I think most listeners, even those who like a darker side to the Doctor, will be troubled by the Doctor's too easy acceptance of the idea of humans being sacrificed to the Wirrn. Surely he has always hated the idea of individuals being sacrificed for the good of the many? It seems higly likely that the sacrificial system would be abused, with the disabled and those who are unpopular (for whatever reason) being given up to the Wirrn.

Sheridan Smith is not at all bad as Lucie, but her character is not terribly interesting in this drama. I have never heard any of her other stories, so I know little of her character in general.
Posted by Matthew Celestine at 02:42