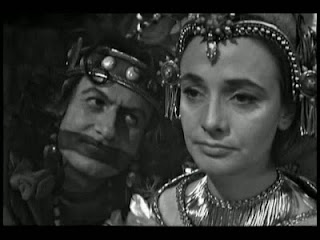 In an attempt to alter the timeline, a being from the far future masquerades as an Aztec goddess.

There have been a fair few advanced beings masquerading as deities in the Doctor Who universe- Magnus Greel, Cessair of Diplos, Sutekh, the Jaggoroth, the Mandragora Helix and that wicked creature, Barbara Wright! It is ironic that in this early story, Barbara, who is portrayed as far more noble and heroic than the Doctor, is doing exactly the sort of thing that Doctor Who villains do! The villain of this story, Tlotoxl shows the sort of sceptical and questioning mind that would usually be celebrated in Doctor Who. I think this adds to the sense that season 1 is so enjoyable because it differs in so many ways from the very tightly defined ethos of later Doctor Who.

The story has a very melancholic mood. Nothing has really been acheived at the end. Barbara attempted to do something incredible in changing a whole culture, but discovered the hopelessness of this task. The Doctor and Cameca part with not a little sadness and Autloc's life is torn apart. This downbeat ending really sets the story apart from others across the history of the show. In my opinion, Genesis of the Daleks would have benefited from a similar ending. It seems manifestly obvious that when the Fourth Doctor claimed that he had set back the progress of the Daleks he was talking nonsense (probably to cheer Sarah and Harry up). The Daleks were hardly going to have too much trouble clearing away a bit of rubble. The Doctor had attempted to do what Barbara did here and like her, he failed.

Despite the melancholy tone, a good deal of the plot has a somewhat comedic structure with a lot of coincidence and irony. There is a certain of comedy of manners in Barbara's brilliantly scripted exchanges with Tlotoxl. Susan's preference of torture and gruesome execution over forced marriage seems (probably unintentionally funny). It's not like she is being forced to marry an ugly old man, and the bridegroom-to-be was going to be offered as a sacrificial victim anyway, so she would be a widow pretty quickly.

The Doctor's brief affair with Cameca at first seems grossly out of character. We never again see the Doctor falling in love in the classic series. Yet given what we see of the Doctor in his first season this makes sense. There are two things that are distinctive about the First Doctor. The first is that he is, contrary to appearances, a younger version of his future selves. Contrary to the impression given by The Three Doctors and The Five Doctors, the First Doctor is not older and wiser than the others. He is consistently shown to be less moral, less responsible and less emotionally mature (except when compared with the Sixth Doctor). If the Fifth Doctor is an 'old man in a young man's body,' then the First Doctor is a teenager in an old man's body. It should not thus be a surprise if he takes a woman on an emotional ride. Secondly, he is unlike the others, a family man. We don't know anything about the Doctor's sexual partner or children, but if we accept Susan at face value (there is no evidence whatsoever that Susan is only an adopted 'granddaughter'), then the Doctor has had a family (the novels Cold Fusion and The Infinity Doctors offer an whole backstory about the Doctor's marriage to a nurse called Patience, but this is of debatable canonicity). The later Doctors may have forgotten the joys of love and marriage, but they are a more recent memory to this one. 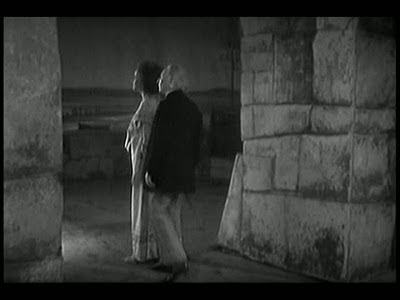 It does seem a bit odd that Barbara, an historian and apparent expert in Aztec history, believes that the abandonment of human sacrifice might save Aztec civilization from the Conquistadors. Surely, she must know that the conquest of South America was motivated but greed for gold and the ambition to create a new Christian empire on the continent, not moral disapproval of Aztec sacrificial practices. The Conquistadors were hardly men who were ashamed of bloodshed!

The Doctor tells us in this story that one cannot change history. I think it is clear by this that he means it is impossible, rather than that it is morally wrong. There is never any suggestion that any of the actions of the other members of the TARDIS crew could affect history. Given how fragile the timeline appears to be in Big Finish stories, one might imagine that Susan attending an Aztec school could easily have major implications. The Doctor is trying to show Barbara the futility of her actions. In my opion the premise that history in Doctor Who is immutable is the 'correct' one. I think it is unfortunate that later stories suggested that history could easily be altered. I am particularly concerned by Steven Moffatt's belief that Doctor Who is all about funny things happening to the timeline and parallel versions of history. I think that is a complete distorion of the ethos of the show.

The Aztecs is a great story. Given the loss of so many historical serials, we can be thankful that this one survived.
Posted by Matthew Celestine at 05:00