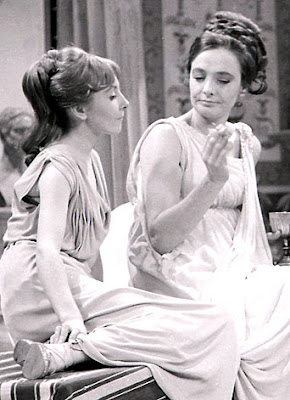 Doctor Who does Carry On with a pinch of Ben-Hur

No fan should underestimate the importance of the historical stories. However, the difficulty in terms of appreciating then is that so few survive. I can't help thinking that it is a shame that this one survives and not Marco Polo or The Massacre.

The big problem with The Romans is that it combines a really camp attempt at Carry On style Roman comedy with a very dark set of subplots about Ian and Barbara being taken as slaves. The gulf between the to moods is a little too disorientating for the viewer. I think it would have been better to have come up with a more light-hearted subplot for Ian and Barbara that would have maintained the comedy vibe througout. Personally, I find a lot of the comedy in this serial a bit silly and not that amusing, but I know a lot of fans love it.

The Romans does not make much effort in terms of historical accuracy. The real Nero was absolutely nothing like the buffoon we encounter in this story. Ofc ourse, the same can be said of Peter Ustinov's rather more well known performance. I also wonder how likely it was that slave traders would just pounce on a bunch of strangers in Roman Italy. True, the slave traders know Ian and Barbara are travellers, but it is not inconceivable that they might not be recognised. They seem to be taking a big risk. Slave traders were not kidnappers in general, but traded in men and women taken in war or the children of slaves.

Hartnell gives a very manic performance. It is very easy to see in this story the wild, immature side of the First Doctor. I like to think of him as a 'teenager in an old man's body,' the very reverse of the Davison and Smith Doctors. Maureen O'Brien has a few nice moments of interaction with Hartnell, but as usual her performance is far from convincing.

Ian and Barbara's moments together have often been described as 'post-coital.' Watching this story, it is difficult to doubt that they might have been sleeping together, at least here in the villa, if not on the TARDIS.
Posted by Matthew Celestine at 07:08