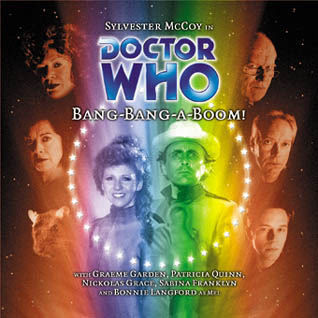 The Seventh Doctor becomes commander of the space station Dark Space 8 which is hosting the Intergalactic Song Contest.

This is the second Christmas 'pantomime' that Big Finish produced. The first was The One Doctor which was a sly send-up of our favorite show. With their second Xmas comedy story, Big Finish decided to pastiche science fiction shows like Star Trek Deep Space Nine, Babylon Five and Space 1999, as well as the Eurovision Song Contest.

As I have said, I find it delightful that Big Finish put out several plays starring Sylvester McCoy and Bonnie Langford. I am one of those rare fans that actually likes Season 24 with it's guady pantomime. This light-hearted comedy romp is perfect for the camp duo of Sylvester and Bonnie.

Much of the humour is found in sending up the crass dialogue of mainstream science fiction shows, hence space station doctor Eleanour Harcourt continually exclaims 'I feel so helpless,' endlessly reminisces about previous adventures and makes some appalling attempts at developing a romantic relationship with her 'commander.' Bonnie also get's to say 'He's dead' a few times too.

Patricia Quinn steals the show as the Valkyrie/ Klingon-like warrior queen, Angvia. She makes a hilarious and possibly successful attempt to seduce the Doctor, who she calls her 'leetle man.' Wisely, the writer leaves it uncertain whether the Doctor has actually had sex with her and Bonnie's reaction to his seduction is glorious. Her number in the song contest is very funny too. Angvia's entry in the song contest is pretty funny too.

David Tughan gives a good and vital impersonation of Terry Wogan, as the character Logan. In the character of Nicky Newman, we get a parody of some of the Pop Idol winners. Geri Pakhar, the rodent-like ambassador seems remarkably similar to Alpha Centauri in the Peladon stories.

It is remarkable how well the Agatha Christie mystery format works in Doctor Who and this story is no exception. Mel and the Doctor make great detectives and they get to do the final expose scene in Poirot style. Sylvester McCoy gives us his eternally manic performance and Langford is great, even though as I said when reviewing Flip Flop, on Big Finish she does sound different to how she sounded in the 80s.

Gareth Roberts did a splendid job with this, giving us a memorable cast of characters and some great comic melodrama. It was amusing to find out the Earth anthem in the far future, presumably this is a sly reference to the Doctor's comment about the human race in Ark in Space.
Posted by Matthew Celestine at 04:27