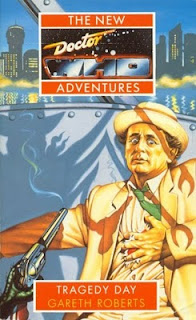 The Seventh Doctor, Ace and Bernice turn up on a planet that the Doctor has visited before. There are lots of horrible things going on at this planet, meanwhile some mysterious monks are hunting for the Doctor.

Doctor Who has always had left-wing tendencies, but these tendencies particularly came to the foreground in the Sylvester McCoy era, where the writers pursued a very 'right-on' agenda. The 'politically correct,' left-liberal values continued in the Virgin New Adventure novels. You can see these politics in fandom; those who like the Sylvester McCoy era tend to be more left-leaning, while their opposites who love the Pertwee era tend to be more conservative. My enjoyment of the 'right-on' tendency in 80s/90s Doctor Who is with a certain irony, as I am a Tory (though a very moderate, centrist Tory).

Gareth Roberts' Tragedy Day is as politically left-wing as Doctor Who can possibly go. It aims its satire in all different directions, but all of them associated with capitalism. He attacks police brutality, the class divides perpetuated by wealth and bureaucracy. With extra venom, he attacks the way charity, particularly celebrity endorsed charity, fails to solve problems of poverty and ends up becoming hypocritical. He also takes a swipe at the way sitcoms reinforce conservative ideas about society.

This novel is written for fans who think that The Happiness Patrol is one of the best Doctor Who stories ever (like me). It would be an understatement to say that Tragedy Day is inspired by The Happiness Patrol; rather it grounds and defines itself in the both the style and the agenda of that story.

Gareth Roberts writes with a really sharp and dry wit. He brings in dozens of minor characters, some of whom are only referred to on one or two pages (like the bureaucrat who manages the barrier diving the city up). These minor characters help to build up a massive picture of what this society is like.

It is not perfect; I am not sure that Gareth Roberts quite gets the Seventh Doctor right. He does a good job at portraying NA Ace and Bernice, however. A lot of reviewers felt that the bad guy's change of heart towards the end did not seem quite plausible.

I am not going to spoil anybody's enjoyment of the surprise regarding what the cover depicts. The scene depicted involves one hilarious character!

I think this is one of the best New Adventure novels. I know not everybody likes it. If you are a Daily Telegraph reading Pertwee fan, you probably won't like it. But if you are a Guardian-reading McCoy era fanatic, you will love it.
Posted by Matthew Celestine at 03:31